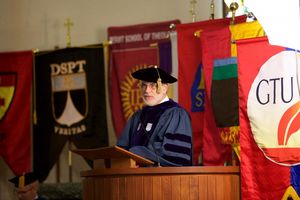 On May 7, forty-four graduates were honored at the GTU's 2015 commencement ceremony at Pacific Lutheran Theological Seminary's Chapel of the Cross in Berkeley, California. (See video.) Twenty-four graduates received the Master of Arts degree, three the Master of Arts with a concentration in Biblical Languages, and seventeen the Doctor of Philosophy degree.  Each of these students completed their programs in Fall 2014 or Spring 2015.

Sr. Marianne Farsina CSC, Associate Professor of Catholic Theology and Philosophical Ethics at the Dominican School of Philosophy and Theology, spoke on behalf of the faculty addressing the graduates with a speech entitled, "Dia-logos and the Virtue of Hope."

José Balcells, Ph.D. Biblical Studies, addressed his fellow graduates in his reflections on leaving the known and venturing into new territory entitled, "Are We Willing to Leave Our Anchorage?"

Dr. Munir Jiwa, the Founding Director of the Center for Islamic Studies and Associate Professor of Islamic Studies at the Graduate Theological Union, was awarded the 2015 Sarlo Excellence in Teaching Award at the GTU.  The selection committee believes that Dr. Jiwa embodies in an exemplary way the values of “interreligious sensitivity and commitment” “interdisciplinary approach and content in teaching,” “sensitivity to ethnic and cultural diversity,” and “creative and effective classroom pedagogical methods and performance.”

Graduates seeking to purchase professional photos taken at the 2015 commencement ceremonies can do so here.