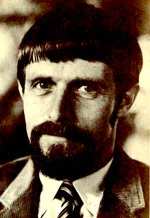 Cohen (1928- ) grew up in Philadelphia. He graduated as an engineer from the United States Naval Academy in 1949 . He toured the Seas of Japan on USS Floyd B. Parks prior to the Korean War and later served as an engineer on the USS K-1 submarine and the USS Catfish.

In 1954 he resigned from the Navy and enrolled in Graduate School of Theology, Oberlin College, Ohio. "I wanted to equip myself to be a peacemaker in this new age. Given the way the world was heading in the post World War II years, I saw a church career as consistent with the family tradition of responsible citizenship," he explains.

He became the first full time campus minister with the United Christian Campus Ministry at California State College at Fullerton in 1965.  Cohen, like many other campus ministers at this time, was an activist and often served as a mediator between factions.

In 1969, Cohen moved to California State University at Los Angeles, where he remained as the UMHE campus minister until 1996.  He chaired and served in various capacities on community groups (Zero Pet Population Growth), ecumenical organizations (Southern California Ecumenical Council), and UCC commissions (Network for Environmental and Economic Responsibility, convener with Donald B. Clark). Beginning in 1972, Cohen participated in world population and environmental conferences, bringing with him students and church members.

Following his retirement from the ministry in 1996, he became Executive Director of the Southern California Ecumenical Council.

Cohen included nearly 200 posters from the sixties and  the eighties with his dontation.  Some of these will be on display as part of the Robert McAfee Brown  exhibit  in the library, which can be seen from October 1, 2010 to January 15, 2011.

His collection is one of several within the archives that cover campus ministry in California during the second half of the 20th century.

For more information on the Cohen papers see: the finding aid.