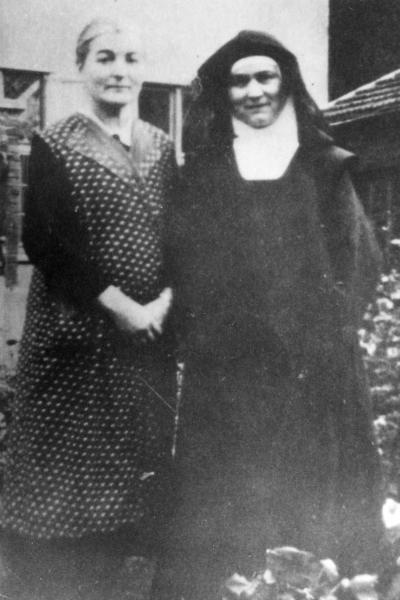 Edith Stein (1891-1942), St. Teresa Benedicta of the Cross, was born into a Jewish family in Breslau, Germany. She became a philosopher, phenomenologist, teacher, feminist, and translator.  In 1922, she was baptized into the Roman Catholic Church.  Unable to continue as a teacher as a Jew under Nazi rule, she joined the Discalced Carmelites in 1933.  In 1942, she and her sister Rosa were arrested in Echt and killed at Auschwitz. Edith Stein was canonized in 1998.  She is one of the six patron saints of Europe.

The picture at right is of Rosa Stein and Edith Stein in Echt,  1939.

The Edith Stein Collection was donated to the Graduate Theological Union by Susanne M. Batzdorff,  a niece of the saint and resident of Santa Rosa, during the summer of 2013.

A ceremony was held on October 29, 2013, to formally thank Batzdorff for the donation.   The collection, already well organized, was quickly processed. An exhibition based on the collection was on display in the library from October 2013 to February 2014.

For the ceremony, Batzdorff  was joined by a number of speakers from different perspectives to discuss the saint and the collection: Eloise Rosenblatt, PhD; Rev. Dr. Thomas Devereaux; Emily Leah Silverman, PhD; Justin Gable, OP; Rev. Dr. Louis Weil; and Rev. Dr. John Sullivan, OCD (written remarks). Support for the exhibition came from a generous donation from Rosenblatt,  who originally helped to arrange for the donation to GTU, and a grant from the American Theological Library Association.  Below is a video of the event.

During the years after the end of World War II,  members of her family were asked by researchers and the Catholic Church to provide insight into the saint and her sister Rosa. The two main contacts have been Dr. Erna Biberstein and her daughter, Susanne M. Batzdorff.

Dr. Erna Biberstein (1890-1978), like her sister Edith, attended higher education in Breslau, becoming an obstetrician and gynecologist.  Her husband, Hans Biberstein (1889-1965), a dermatologist, was able to immigrate to New York in 1938.  In 1939, he obtained visas and brought Erna and their children, Susanne and Ernest, to the United States. The children and their families later moved to California.

When Biberstein died in 1978, her daughter Susanne, a librarian, writer and poet, explains:

I inherited my involvement with Jewish-Catholic dialogue years ago, from my mother. As the only surviving sibling  of Edith Stein,  she had maintained a vast international correspondence with many persons interested in Edith Stein…After my mother died in January 1978,  at the age of almost 88, her interfaith correspondence and her Edith Stein connections fell into my lap, and I have been dealing with this heritage ever since.

Batzdorff assisted as editor/translator of a new edition of Teresa Renata Posselt’s book, Edith Stein: The Life of a Philosopher and Carmelite. Her article on her aunt’s beatification in the New York Times Magazine (“A Martyr in Auschwitz,” April 12, 1987) touched many people. She has participated in many conferences and events and has written numerous introductions to books on Edith Stein. Her other books include Edith Stein: Selected Writings, Aunt Edith: The Jewish Heritage of a Catholic Saint, and two collections of poetry.

In 2002, she arranged to donate her collection of papers and books on Edith Stein to the GTU. Instrumental in the decision were discussions with Dean Margaret Miles, her assistant Eloise Rosenblatt, and archivist Lucinda Glenn. During the discussion about the collection, Glenn wrote on September 11, 2001,  "At the GTU, we respect Edith Stein for all she was and is, a woman, a Jew, a scholar, a philosopher, a nun, a saint, and more. We respect and appreciate the whole person, her whole thought, and all of her gifts."

Susanne and Alfred Batzdorff delivered the collection to the GTU on June 19, 2013.  Eloise Rosenblatt,  a Sister of Mercy and  busy family law attorney,  joined in the delivery, largely postponed due to Susanne's ongoing writing projects and speaking engagements.  The collection included 3 boxes of manuscript materials and 6 boxes of books.

Edith Stein (1891-1942) was born into a Jewish family in Breslau, Germany. After a successful early academic career, she joined the Catholic Church and was was baptized on January 1, 1922. She taught at a Dominican girl’s school in Speyer from 1922 to 1932. Because of the anti-Semitic legislation in Nazi Germany, she was forced to resign her position. She requested an audience with the pope in the spring of 1933 hoping that an encyclical would counteract the growing wave of anti-Semitism in Germany. However, the request was lost in bureaucratic confusion.

In 1934, she entered a Carmelite convent in Cologne, taking the name St. Teresa Benedicta of the Cross. In 1938 she was transferred to the Carmelite convent at Echt in the Netherlands to protect her from the Nazi threats to Jews. This ultimately proved unsuccessful. She and her sister Rosa were taken by the Gestapo and sent to Auschwitz. On August 9, 1942, she died in a gas chamber along were her sister and others.

She was proclaimed a saint by Pope John Paul II in 1998 and as one of the six patron saints of Europe. Some controversy took place over her sainthood, as many did not consider her death as an act of Christian martyrdom but rather as being one of millions of Jews who were killed. However, it was the way she lived her life and wrote and thought that in large part led to her canonization.

An enormous amount of writing is available on Edith Stein, who as an academic and a philosopher is a very modern and complex saint. The significance of this archival collection is that it captures her family's view of Edith Stein, follows her search for the truth in philosophy and religion, and provides a quick synopsis on the amount of attention that she has received since her beatification and canonization in the form of memorials, conferences, journals, art and performance art.

The finding aid for the collection is on Online Archive of California. Some photos and other materials have been posted on our digital library. To visit and explore the collection, please contact the archivist at archives@gtu.edu.