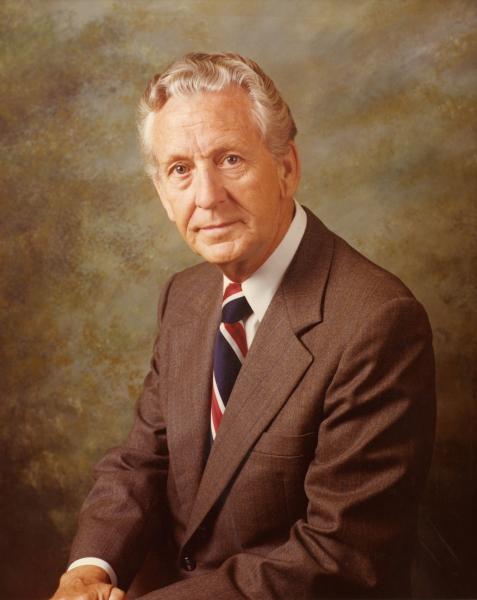 The Rev. Paul W. Yinger was not a famous man, but he touched many lives. A Congregational minister who once served as chairman of the GTU board of trustees and later as GTU vice- president, Yinger had a distinguished career in ministry and public speaking.

His many interests brought him into contact with a variety of ministries and people, including actor Lew Ayres. Yinger is prominently featured in the  Lesley L. Coffin's Lew Ayers: Hollywoods Conscientious Objector (2012).

Throughout his life, Yinger meticulously kept track of correspondence, speeches, marriage records, church bulletins and a host of other materials from his
career and personal life. Together, they offer a fascinating glimpse into what it means to be a parish pastor.

Paul Yinger was born in Union City, Michigan, in 1914. The sixth of eight children, he early on developed an appreciation and talent for drama and preaching. Both Yinger's parents were ordained Methodist ministers and encouraged their children in music and public speaking. Yinger's father George organized first his four oldest, then his four youngest, children into the "Yinger Singers," who performed in towns throughout Michigan. 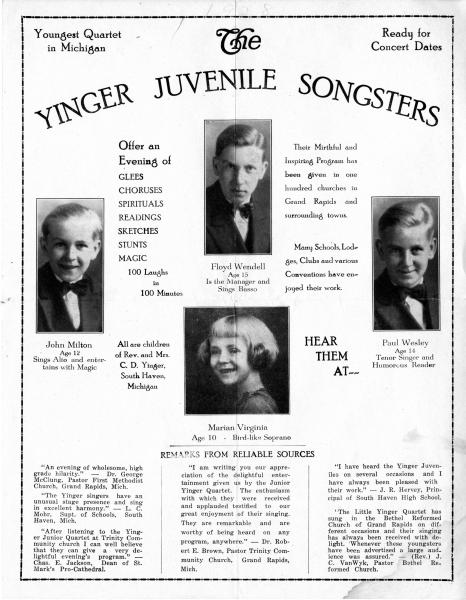 Yinger attended DePauw University in Indiana, where he received his B.A. in 1936. Like his parents and three older brothers before him, he decided to become a minister, and received a B.D. from Union Theological Seminary in 1939. After graduation he was ordained in the Congregational Church and moved with his wife Harriett to Washington, D.C., where he served as pastor at Cleveland Park Church for the next four years. He continued to pursue acting and voice with private lessons and public performances at the Old Wharf Theatre in Provincetown, Massachusetts.The Yingers' daughter Marilyn was born in 1942.

In 1943, Yinger volunteered as a chaplain in the U.S. Army. He served in the 880th Airborne Engineer Battalion in New Guinea, where he met and became friends with Lew Ayres, star of the film All Quiet on the Western Front. Each took an active interest in the other's career, and shared plans about their post-war professions. In his letters to Ayres, whose fascination with religion later led him to write a book on "Altars of the East." Yinger expressed his intention to pursue his "dramatic interest" when he returned home. "I feel my medium is more especially in the one than in the other in dramatic interpretation rather than preaching." Yinger wrote to Ayres.

Upon completing service in the Philippines and occupied Japan in 1945, Yinger became pastor at First Congregational Church in Riverside, Calif. His son Jay was born in 1947.

Although Yinger never became an actor, he found creative methods of incorporating drama into his ministry. He took an active role in coordinating parish activities, including radio broadcasts, drama events and a lecture series. A popular speaker at clubs, organizations and schools, Yinger presented programs based on his life experiences or those of people he knew, and adapted works of literature for dramatic readings and one man shows. A particular favorite was Lloyd Douglas' The Robe, which, with the permission of Douglas, Yinger adapted and performed over a hundred times, both solo and with a full cast.

He kept detailed records of his work in all four places, including files on the marriages he performed, columns written for parish newsletters, church bulletins, and notebooks of his sermons, prayers and devotional material. The many letters he saved from this period, both personal and busin essrelated, provide details of church management,the needs of parishioners, and his own assessment of his job performance.

Yinger also kept material from his years as a GTU trustee and vice-president of the consortium. He was active in many other organizations as well, including the Pacific School of Religion, the Aquinas Fund and Japan International Christian University Foundation.

After resigning from his Piedmont pastorate in 1971, Yinger and his wife traveled extensively, often combining a vacation or study trip with preaching engagements. He returned to the ministry in 1973 when he accepted the call from First Congregational Church, serving the parish until his retirement in 1976.

Yinger led an active retirement, continuing his speaking engagements and guest preaching, and serving as a chaplain on cruise ships. He died in Arizona in 1992.

His extensive records were donated to the GTU archives by his wife Harriett. The finding aid  is located on Online Archive of California.

Adapted from an article in GTU Currents, Fall 1998,  by Lucinda Glenn, long time archivist for the Graduate Theolgoical Union.