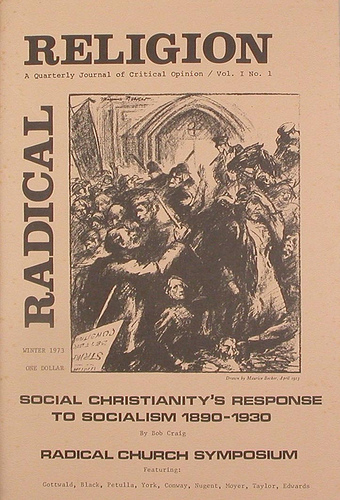 In 1973, the Berkeley Free Church which had operated in the South Campus area of Berkeley since 1967, closed its doors,  taking time to contemplate its future work.

The former staff and board decided to conclude its ministry of survival services to street people and continue its publication arm in a new direction. This resulted in the creation of Radical Religion: A Quarterly Journal of Critical Opinion (1973-81).

Those who published the journal formed a collective, the Community for Religious Research and Education. Over the years of its existence, many members of the collective were students and faculty at the Graduate Theological Union and the journal’s workspace was in the GTU community.

Members of the collective not only participated in publishing the journal, but were encouraged to be involved in causes and issues that interested them. This included being members of groups or organizations, and helping with those groups’ work and actions. Collective member involvement in other groups is reflected in the included records of the Bay Area Americans Toward Christian Socialism (ACTS), the Episcopal Peace Fellowship, later known as the Ecumenical Peace Institute, and the Committee to Save Maggie’s Farm.

It was the Committee to Save Maggie’s Farm which was the main opposition group to the construction of the GTU Library at 2400 Ridge Road. Known as the Wilson property after former owners, students had dubbed it with the name from a Bob Dylan song.

The GTU Institutional Records contain extensive documentation from the GTU side on the protracted battle to obtain City of Berkeley permits to demolish the existing house on the property and construct the library building. With the inclusion of the Committee to Save Maggie’s Farm records in the Radical Religion Collection, the GTU Archives now holds a complete picture from both sides of this pivotal issue in the history of the GTU and the Library. For more photos, go to 2400 Ridge Road.

The Radical Religion Collection consisting of 9 ½ feet of files came to the GTU Archives as a part of the Berkeley Free Church Collection. The BFC Collection, GTU 89-5-016 containing 23 ½ feet, is open for research as well. Both collections have guides which include historical sketches of the organizations and complete listings of the contents.

For more information, see the Finding Aid or email archives@gtu.edu.