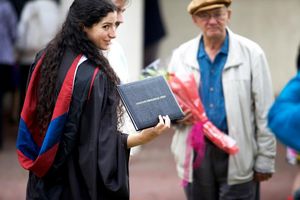 Graduates are listed below by degree and include their thesis title, area of study or school of affiliation, committee members, and thesis abstract; language specialization is noted for MABL graduates in lieu of thesis information.

As a branch of philanthropy, philoptochia is love in action for the poor and the ultimate definition of God’s relationship to humankind. According to the poverty sermons of the Church Fathers in the fourth and fifth centuries, faith and charity are the two necessary sides of the same work. They are the inner and outer heart of any human being.

“Compassion is the form love takes when suffering occurs,” says Dr. Barbara Fredrickson.  My thesis explores compassion as an engaged wisdom practice, essential for our survival and thriving.  My hope in writing this work is that in the midst of today’s suffering and despair, filled with unsatisfactory material pursuits and incomprehensible conflicts, we neither belittle nor romanticize compassion, but engage suffering and embody true compassion for the benefit of all beings.

The Transformation of Attachment, Loss, and Love through Religious Experience

This thesis defines and explores the importance of developmental attachment. The Buddhist definition of attachment is reviewed as a mode of suffering. The study also examines how a developmentally attached individual can proceed through the grieving process via the Buddhist aspect of the middle way and explains the transformative process of the individual through religious experience.

Biblical scholars have disagreed for centuries about the meaning of the Hebrew word almah found in Isaiah 7:14. This thesis does not fully trace this theological and historical controversy, but focuses on the specific ways this controversy has affected the word choice of Isaiah 7:14 in the Samoan Bible. The transformation of the word fafine in the first translation in 1855 to taupou in 1877 is problematic and drives the question of this thesis. The argument put forward here supports a return to the term fafine as reclamation of the earliest translation.

A Critique of Nonviolence: On the Powers and Limits of Encounter in the Thought of Martin Luther King Jr. and Emmanuel Levinas

This thesis explores conceptions of violence and nonviolence in the thought of Martin Luther King Jr. and Emmanuel Levinas to better understand how Kingian nonviolence works.  Levinas’ notion of “the face” provides an alternative explanation of the transformative power of nonviolent resistance, though with modifications to King’s theory. These similarities and differences play out in their respective models of the face-to-face encounter.

This thesis identifies and examines the contributors to The Fundamentals, an anthology that served as a founding document of the American Protestant Fundamentalist movement.  The set of contributors reflect an effort to construct a Trans-Atlantic, interdenominational network to resist perceived modernist trends.

Master of Arts with a Concentration in Biblical Languages

American Baptist Seminary of the West 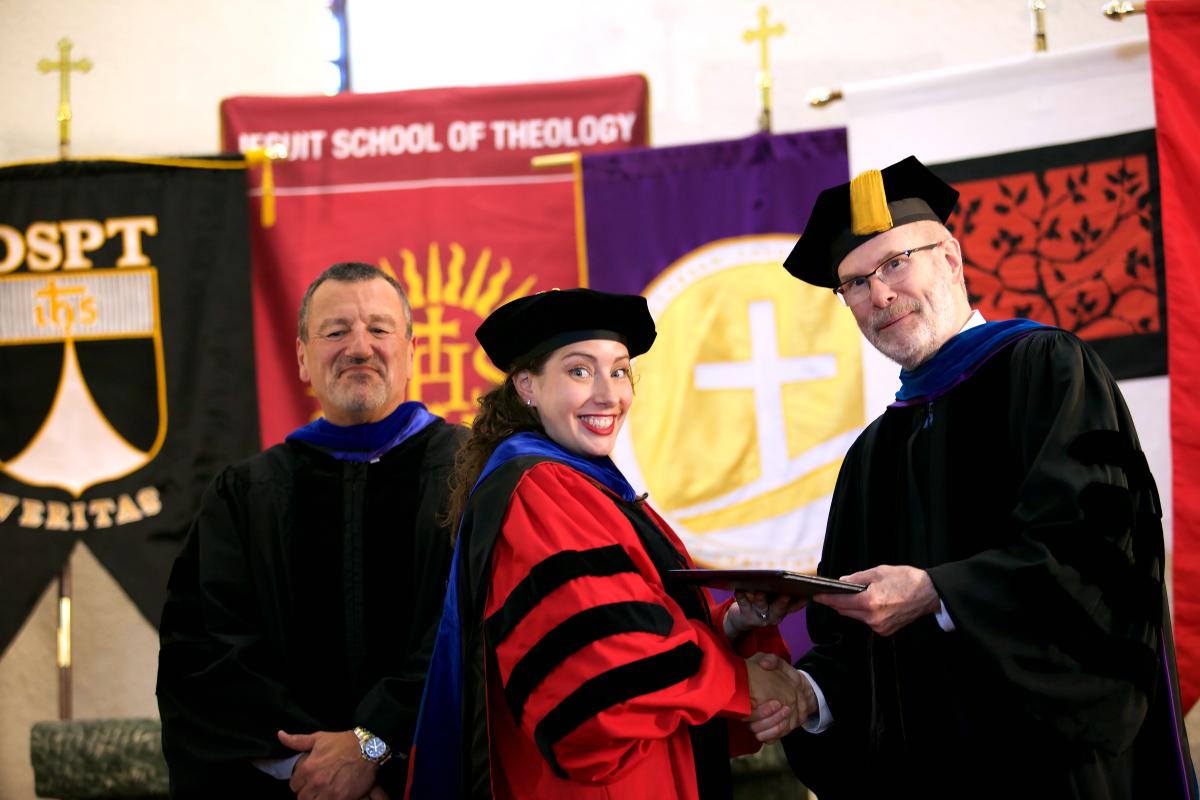 Uncovering Jewish Creativity: Gender and Intertextuality in Book III of the Sibylline Oracles

This dissertation on Book III of the Sibylline Oracles uncovers how the author made creative narrative transformations and how these inter-textual and inter-cultural references shed light on the author’s context. It demonstrates the unique quality of the Sibylline Oracles as not only appropriating a known Greek figure into Jewish history, but also choosing a female voice as a conduit for prophecy.

While texts are useful for understanding religious practices, they cannot be viewed as normative as they leave families out of the scholarly picture, and they overlook the existing archeology. This study investigates the architecture and ritual artifacts from Persian period Tell en-Nasbeh, to gain a deeper understanding of the religious ideas and practices of families and households in Judah.

Communities of Difference: Constructing an Ecclesiology of Multiplicity

“I Am My Brother’s Keeper:” American Catholic Civic Engagement through JustFaith Ministries

Seeing the Things You Cannot See: (Dis)-solving the Sublime through the Paintings of Hiroshi Senju

This dissertation explores the artwork and thought of the Japanese artist Hiroshi Senju, amplifies them through perspectives from Japanese aesthetics and ethics, and applies them to recent debates surrounding the religio-aesthetic concept of the sublime. It contends that Senju’s artworks evoke a sublime marked by a depth that emphasizes particularity and participation, thereby responding to problematic aspects of the sublime.

This project explores the ambiguity of the subject of Delilah in the context of Judges 16:4-22 and its interpretation. Guided by postcolonial discourse analysis, this project unveils the complexity and the multi-vocality embedded in this text and its history of interpretation, and argues that Delilah is an ambiguous colonial subject who can be both a colonizer and colonized simultaneously.

Moral Casuistry and the Ethnics of Military Combat

This dissertation examines the normative relationship between formal ethical theory and practical policy decisions on the moral question of war. American Presidents have justified the decision to go to war over the past twenty-five years by reference to a “Presidential” tradition of norms and narratives that operates casuistically and mediates the scholarly traditions from which these norms and narratives originated.

In Jewish Pursuit of Justice: Using Critical Pedagogy and Critical Whiteness Studies to Teach Israel/Palestine in the United States

This dissertation accomplishes two primary goals: 1) according to the principles of critical pedagogy, articulate the Jewish position in a racialized world as understood through the theoretical lens of critical whiteness studies, particularly in the United States and Israel/Palestine; and 2) propose a critical pedagogical approach to teaching about this topic in a university setting in the United States.

Death and the Afterlife in the Book of Job

This dissertation is a study of the Zurich reformer Heinrich Bullinger’s commentary on 1 Corinthians published in 1534. His commentary was an instrument for clerical education and formation of solidarity among Reformed churches. The humanistic commentary was methodologically distinguished by its copious, meticulous use of exegetical sources and detailed rhetorical analysis. Between Erasmus and Calvin, Bullinger became one important step in the development of biblical commentary in the sixteenth century.

Orality and Interreligious Relationships: The Role of Collective Memory in Christian-Muslim Engagements in Maluku, Indonesia

Scorning the Image of Virtue: Church and Theatre in Post-Settlement England

This dissertation examines how sixteenth-century English iconoclasm extended beyond the church to include the visual, literary and performing arts as consistent subjects of theological controversy. Using historical and intertextual analyses of literary, visual, and other primary sources, this study demonstrates that church and theatre were competing kinds of performance in early modern England.

This dissertation demonstrates that Anna Jameson’s “poetical” approach constitutes a variant of theological aesthetics methodology.  By moving her readers beyond a simple understanding of the signs and symbols of Christian art and into a deeper appreciation for the profound union between the beauty of sacred art and the theologies contained therein, Jameson presents the contours of a method that moves beyond the art historical and into the properly theological.

Deliberation, Faith and Freedom in Alexander of Aphrodisias and Clement of Alexandria

This dissertation analyzes Alexander of Aphrodisias’ model of deliberation in comparison with Clement of Alexandria’s doctrine of faith within the larger question of the origins of the concept of free will in antiquity. These contemporaries each made use of Aristotle’s texts in addition to Stoic categories to develop a distinct indeterminist notion of freedom to do otherwise.

Sin and Brokenness, Passage and Purpose: Reforms in Recent American Lutheran Rites for the Pastoral Care of the Sick

This analysis of the Healing rite in Evangelical Lutheran Worship, based on an archival investigation of the rite’s creation, includes an examination of ways of describing the rite as “passage” and determining if the rite “worked.”  The dissertation develops a Lutheran theology of healing that differentiates sickness and sin, critiques the language of “brokenness” and “wholeness,” and describes Christ as both “doctor” and “medicine.”

“For You Were Bought with a Price”: Slaves, Sex, and Self-control in a Pauline Community

This dissertation uses a socio-rhetorical methodology to argue that Paul advocated freedom for slaves in 1 Cor. 7:21-24 so that they could avoid sexual fornication and exploitation.  Paul adapts the discourses of self-control over the desires present in Greek and Latin literature to his Christian context, which had particular resonance in Corinth as a city that valued freed slaves.

In a series of close readings of three mystical pairs – François de Sales and Jeanne de Chantal, Jeanne des Agnes and Jean-Joseph Surin, and Madame Guyon and François de Fénelon – this study considers the question of how spiritual friendships engage the problem of mysticism and morality in the context of the seventeenth-century French Catholicism.

Toward an Ethic of Solidarity and Reciprocity with the Marginalized: Catholic and Confucian Social Ethics in Dialogue

This dissertation demonstrates the importance of integrating virtue ethics and principles-based human rights approaches in Catholic social teaching in order to provide a foundation for Catholics in Hong Kong to embrace a more active and comprehensive commitment to the needs of the marginalized.  I also demonstrate how virtue features of Catholic and Confucian ethics shed light on each other and contribute to formulate a more contextualized and inculturated Catholic social ethics.