Scholarship and Spirituality as Bridges 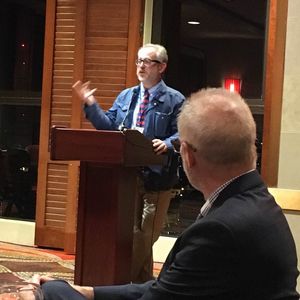 Dr. Jeffrey L. Richey (PhD, 2000) is the GTU’s 2016 Alumnus of the Year. Dr. Richey is Professor of Religion and Asian Studies at Berea College in Kentucky, where he holds the Francis Alexander McGaw Chair in Religion. A highly respected scholar of Chinese and Japanese religions, Richey has published and edited numerous books on both historical and contemporary Confucianism and Daoism, and is currently at work on a book tentatively entitled Interfaith Spirituality in Post-Religious America’s Asian Century.

We are pleased to share this article, adapted from Dr. Richey’s speech at the GTU Alumni Reception during the annual meetings of the American Academy of Religion and Society of Biblical Literature in San Antonio last November. Congratulations to Dr. Jeffrey L. Richey, the GTU’s Alumnus of the Year!

When I think about the GTU, I often visualize the iconic view of the Golden Gate Bridge as seen from the PSR campus. I use the word iconic—in the sense of imaging the sacred—deliberately. For me, this truly is a sacred image, insofar as it has the power to evoke the deepest capacity of the human imagination, the power to conjure another world—or rather a conjunction of worlds—that ordinarily might not seem possible. As the ancient Chinese master Yáng Zhū 楊朱 says: “The sage preserves the sacred and accomplishes the great pacification of the world...by building bridges between Heaven and humanity, making them one without any separation.”

I am reminded of how bridges have performed important roles in expressing the human dream of connection. My teacher and advisor at the GTU, Dr. Judith Berling, once delivered an address as president of the American Academy of Religion in which she described the vocation of the religious studies scholar-teacher as that of a bridge—between cultures, traditions, values, and worldviews, not to mention people.

Another of my teachers, Fukushima-roshi, longtime abbot of Tofuku-ji, a Rinzai Zen temple in Kyoto, Japan, was fond of bridges as sacred metaphors. Tofuku-ji itself is famous for its bridges, which connect various parts of the temple compound to one another, crossing leafy gorges that blaze brilliantly with color during the autumn months. These bridges conduct the novice, the pilgrim, and the tourist from the ordinary world into an extraordinary realm of deep insight into the impermanence, interdependence, and imperfection that link us all together in one ever-present moment. Like Professor Berling, Fukushima-roshi understood himself as a bridge—between Buddhism and other spiritualities, between Japan and the West, and between tradition and modernity.

The bridging power of spirituality and scholarship—which, I have come to believe, amount to one and the same thing—is what drew me to the GTU in the first place, what drove my interests as a young scholar and teacher, and what compelled me to seek a place in the academic institution where I have spent the last 15 years of my career.

I teach in the Asian Studies and Religion programs at Berea College, a small and historic liberal arts college located in the Appalachian foothills of eastern Kentucky. We are an unusual school, in that we admit only students who demonstrate both great academic aptitude and profound economic need. We charge no tuition; we apply a sliding scale to assess other fees (many of our students pay nothing at all); we require all students to work on campus as part of their educational experience, and we privilege the southern Appalachian region as well as ethnic minorities in our admissions policies.

I believe that my preparation at the GTU has enabled and empowered me for such work, this work of helping build bridges—cultural,  intellectual, political, spiritual—between some of America's and the world's most neglected and disadvantaged people and the rest of the world. It is work that is as rewarding as it is demanding, and I am grateful to be a part of it.

We are living in an era when bridges seem to be in short supply. Here in the United States and around the world, nationalists, religious exclusivists, xenophobes, and other reactionaries seek to burn bridges, not build or strengthen them, and some even propose that we construct walls to insulate ourselves from others. To speak frankly, the present does not appear to be a moment for bridges.

Yet we need bridges now more than ever. While some are busy erecting new barriers across human differences, others—such as the GTU—maintain the difficult work and witness of engaging differences in ways that enrich all of us, not only by helping us understand others, but also by helping us understand ourselves better in that process. I see a radical shift underway in our cultural-historical moment that no elected official can undo.

Even as fewer Americans identify with a particular religious tradition, more and more of us—especially among our youngest—find  value in multiple religious traditions. The meaning of the word interfaith is changing from a theological position, denoting a commitment to dialogue between traditions, to a mode of spirituality in and of itself, which bridges traditions to create a new thing in this country. In this sense, U.S. religious culture may be catching up with other religious cultures, such as those of East Asia, where multiple religious participation has facilitated a spirituality that is strong, unifying, and—above all—bridging, even as it has tended to keep exclusive religious identities weak.

I am proud to be part of an intellectual and institutional lineage that bravely bridges our all-too-divided world and seeks to learn from it, and I am humbled to accept this honor as an alumnus of the GTU.

Tags
Jeffrey RicheyAlumniAlumni of the Year