For 35 years, the GTU Bookstore was among the finest theological bookstores in the country and an essential gathering place for GTU students and the Berkeley community 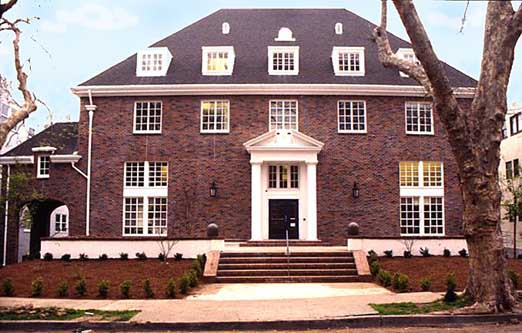 View PDF of this article

This summer marked the second anniversary of the opening of the new Doug Adams Gallery on the first floor of the GTU’s LeConte Building at 2465 LeConte Avenue. With its relocation to this beautiful, new exhibition space in 2016, the Center for the Arts & Religion (CARe) came to the heart of the GTU, where it now shares a home with the GTU student lounge, the Richard S. Dinner Center for Jewish Studies, and the offices of the dean of students, admissions, and financial aid. But what was in this spectacular space before CARe moved in? While those new to the GTU may not know, many who were part of the GTU community between 1973 and 2008 have fond memories of this space as home to the GTU Bookstore, one of the finest theological bookstores west of the Rockies.

The LeConte Building itself has a long and interesting history that precedes the GTU’s establishment. It was constructed as part of the building boom immediately after the Great Berkeley Fire of 1923, and was originally the home of the Alpha Tau Omega fraternity at the University of California, Berkeley. The building was designed by San Francisco architect J.K. Ballantine, who also designed several other distinctive buildings in North Berkeley. The original blueprints for the structure show a living room with a hearth, preserved in what is now the student lounge. The gallery space was once the fraternity dining room, while the CARe office is located in the former kitchen. The building was home to Alpha Tau Omega for more than thirty years, until all U. C. Berkeley fraternities and sororities were moved to the south side of the campus in the late 1950s. 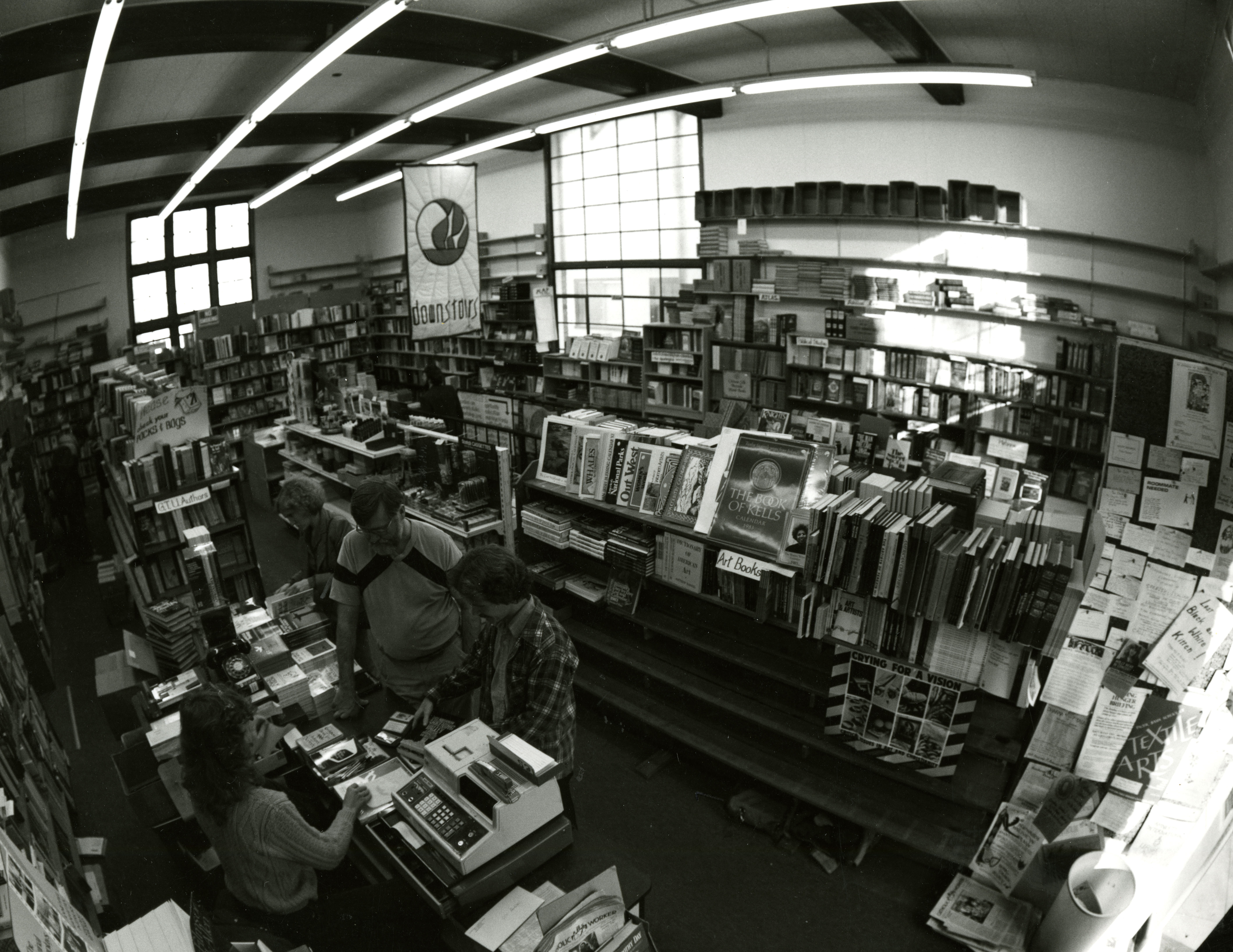 The Graduate Theological Union acquired the building in 1964, only two years after the Union was established. In the second edition of the GTU catalog, issued for 1964-1965, the building is listed as housing the Office of the Dean and the GTU “Bibliographic Center.”

In the early 1970s GTU member schools began negotiations to merge their individual bookstores to create a single store to serve consortial students and faculty. John Rawlinson (PhD, ’82), who served as president of the GTU’s Graduate Student Association from 1972-73, remembers that the Church Divinity School of the Pacific (CDSP) and its bookstore figured prominently in early conversations about the merger. Because the Shires Bookstore at CDSP was believed to be the only seminary bookstore that was not losing money, an initial proposal sought to create a consortium-wide bookstore by merging the stores of other GTU schools into the existing store at CDSP. But two obstacles soon arose.

First, it quickly became clear that the cramped quarters of the CDSP basement could not provide adequate space to house the proposed GTU Bookstore. Space concerns were a significant factor in the decision to locate the new store in the unused space on the first floor of the LeConte building. But a second issue faced the administration as plans got underway. It was revealed that, in fact, the Shires Bookstore was also in debt and could not serve as the single stable entity into which others could merge. The negotiation process had to start anew.

Eventually, the idea of a bookstore membership was devised as a way to recoup costs. By purchasing a membership for $15, students, staff, or faculty would receive a discount on all bookstore purchases. The introduction of membership cards marked the opening of the new GTU Bookstore on LeConte Avenue on February 1, 1973.

Once opened, the GTU Bookstore enjoyed a thriving trade. Rev. Dr. Nancy E. Hall, associate professor of ministry and congregational music at American Baptist Seminary of the West (ABSW), worked at the bookstore from 1980 to 1988. She remembers it as “the hub of all things literary and theological” for many in Berkeley. Nancy began working at the bookstore while studying for her MDiv at ABSW. As a part-time work-study employee, she served as part of the bookstore’s accounting department, working “up in the rafters” of the LeConte building alongside GTU administration and staff. Through her work, she learned basic bookkeeping, which, in the age before computers became mainstream, was all done using huge handwritten ledgers and a mechanical adding machine.

Nancy fondly remembers the laid-back nature of the bookstore, led by its knowledgeable and easygoing manager, Terry Huwe. She recalls a feeling of family among her co-workers. Nancy connected most with one particular colleague, the bookstore’s assistant manager, Mark Theodoropoulos, who had briefly attended Pacific School of Religion. Nancy and Mark began dating in the summer of 1981 and were married in January 1983. Nancy commented, “ours was not the only staff wedding the bookstore celebrated!”

The GTU’s current registrar, John Seal, joined the bookstore team in 1989, and eventually became store The GTU Bookstore in the 1980s. Photo from GTU archives manager. Having left a job at Stacey’s, a large bookseller in the heart of San Francisco’s Financial District, John brought to the GTU a life-long love of books and reading. But as a person of no fixed religion, John says working at the GTU Bookstore “wasn’t an easy or comfortable fit at first.” Yet he grew to love the place. He recalls “building an absolute mountain of New Revised Standard Versions” after the new Bible translation was published in 1989. “Eventually, we sold thousands of copies!” 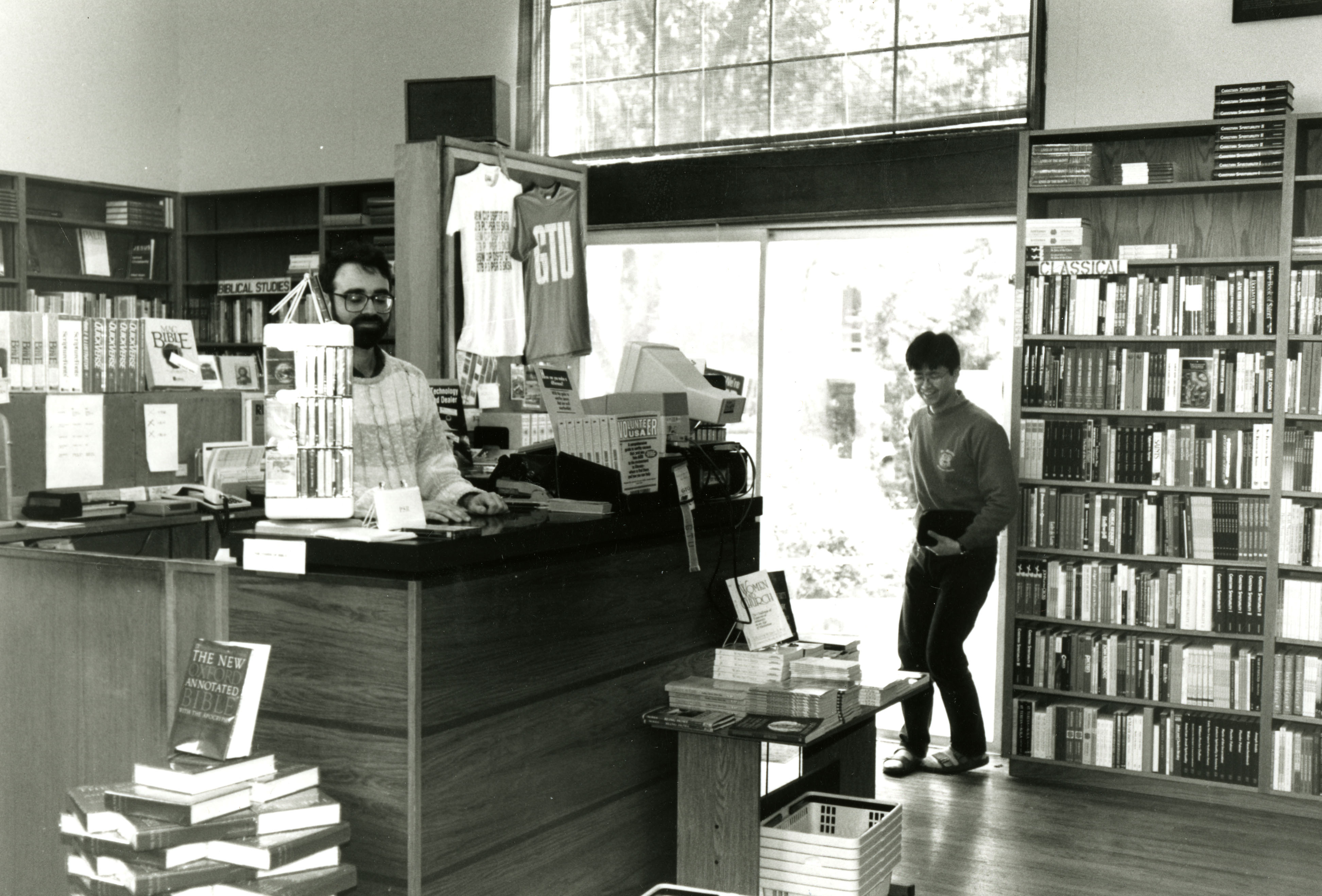 Dr. Kathleen Kook was a frequent bookstore visitor after she became the GTU’s director of admissions in the mid-1990s. Today, as dean of students, Kathleen has an office directly above the old store. She recalls the sense of community that the bookstore provided for the GTU. There was a real “buzz of activity” at the beginning of each semester, as students rushed to buy textbooks for their upcoming classes. But the store offered far more than just textbooks. Its inventory included more than 1500 book titles, as well as a wide range of fun, beautiful, and sometimes irreverent gifts from a large number of faith traditions. This selection reflected the creativity of the bookstore staff, and provided an attraction for prospective students.

Another bookstore regular during his days as a GTU doctoral student was Uriah Kim, now GTU dean and vice president for academic affairs. Dean Kim reports that he spent more time in the bookstore than almost anywhere else on campus, and was deeply saddened at its closing, saying that it “marked the end of an era.” Hours of browsing books about all religious faiths lead him to many spur-of-the-moment theological conversations with friends and faculty among the stacks. Like Kathleen, who remembers the delight of exploring different worlds in the bookshelves, Uriah describes the bookstore as a “magical place,” where he would go not only for his own studies, but to discover a world of religiously oriented texts.

In the late 1990s and early 2000s, the bookstore faced increasingly difficult economic challenges. The high retail prices on essential textbooks were a frustration to students and staff alike. Concerns deepened with the advent of online retailer Amazon in the late 1990s. John Seal remembers the “deep sense of unease” the bookstore staff felt at the time, as online purchasing increased and many independent bookstores were facing closure. The “Amazon effect” increasingly took its toll on the GTU Bookstore, leading to dwindling sales and employee layoffs. Eventually, the GTU Bookstore had to admit defeat and closed its doors for good in May 2008.

In a memo to the GTU community at the time, GTU President James A. Donahue noted: “The GTU Bookstore has served thousands of faculty, students, and members of the public for the past 35 years. It has enjoyed a very good reputation among its customers and has been widely recognized as one of the finest theological bookstores in the country. All of us owe its dedicated staff and managers a debt of gratitude for their contributions to the academic greatness of the GTU these years.”

After the bookstore’s closure, a portion of the first-floor of the LeConte Building was quickly renovated to become the existing student lounge. But the space where the Doug Adams Gallery is now located sat dormant for eight years, closed off by plywood and used for storage. In fact, Dr. Elizabeth S. Peña, director at the Center for the Arts and Religion, says she hadn’t realized there was anything behind the plywood paneling keeping the space a secret. Walking through the narrow door, however, she could immediately tell this space had potential; the high ceilings, large windows, conveniently located office, and unobstructed wall space combined to make the room the perfect candidate for a new gallery.

The creation of the new gallery could not have happened without the efforts of the GTU’s previous Vice President of Finance and Administration Steve Argyris and Building Engineer C. Osborne, both of whom worked hard to make CARe’s vision for the gallery come true. Osborne oversaw all renovations of the space, including the filling in of the stairs leading to the basement, the painting of the walls, the office clean-up, and installations of gallery lighting, a security system, a projector, and glass doors. CARe remains grateful to Osborne for his help.

While the bookstore is missed by many, its legacy as a space that draws together the GTU’s diverse community and its ability to transport visitors to different worlds lives on in CARe’s Doug Adams Gallery. Since opening the new space, the gallery has held six exhibitions and welcomed almost three thousand visitors. From luminous landscape paintings to mixed-media works influenced by Islamic visual heritage, from religiously inspired protest art to Greek Orthodox liturgical vestments, a diverse array of contemporary art has been made available to the GTU community and beyond. In much the same way the GTU Bookstore once added to the learning of students and faculty alike, the gallery now serves as a place of communion, where lively discussions can be held. The GTU and its Center for the Arts & Religion are delighted that this once thriving bookstore space can have a new lease on life as the place where the arts and religion unite.

Lydia Webster is assistant curator of the Doug Adams Gallery. Thank you to David Stiver for digging through the GTU archives to find photographs and blueprints that haven’t been seen in many years. Thanks also to John Rawlinson, Nancy E. Hall, John Seal, Kathleen Kook, and Uriah Kim for sharing their memories of the GTU Bookstore.