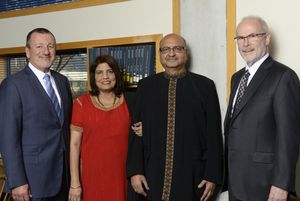 The Graduate Theological Union (GTU) of Berkeley, California, has announced a $4.4 million gift from Mira and Ajay Shingal to establish and endow the first Center for Dharma Studies in the United States. The Center will focus on leading edge, multidisciplinary, graduate research and teaching in Hindu Studies and Dharma Studies. The GTU currently offers a graduate certificate in Hindu Studies, MA and PhD degree concentrations in Hindu Studies, and courses in Jain Studies. The Mira and Ajay Shingal Center for Dharma Studies will support and strengthen these programs, and is designed to include in the future other religions or systems of thought and practice that self-identify as Dharma Traditions. The Center will also host international conferences, produce resources for the benefit of the general public, and foster research on the resources of religion in engagement with major global challenges faced by humanity.

The Graduate Theological Union offers the largest doctoral program in interreligious studies in the United States. The new Center for Dharma Studies is the latest addition to a complex of more than twenty member schools and academic centers at the GTU that together focus on the major religious and wisdom traditions of the world.

Dr. Rita Sherma (PhD, Claremont Graduate University) has been named the first Director of the Center for Dharma Studies and Associate Professor of Dharma Studies. She taught most recently at the University of Southern California as the Swami Vivekananda Visiting Faculty in Hindu Studies. Dr. Sherma is the founding Editor-in-Chief of the International Journal of Dharma Studies.

Ajay and Mira Shingal are residents of San Jose. Both have studied the sacred texts of Hinduism all of their lives and wish for others to be able to explore in depth the treasures of its sacred texts and philosophical principles. They chose the GTU for their historic gift because “this is a school that incorporates both deep scholarship and interest in the practice of religion. We understand the need for accredited scholars that can speak about Hinduism with authority in this country.” Both believe the gift of education is one of the greatest gifts one generation can create for future generations.

The Center will also become part of the GTU’s exploration of how religion can positively impact major challenges faced by the world, including religiously spawned conflict, climate change and environmental degradation, and other issues of justice.

Give to the GTU's Center for Dharma Studies.

About the Graduate Theological Union

The Graduate Theological Union in Berkeley, California, is home to the largest PhD program in religious studies in North America. As a consortium of independent theological schools, the Graduate Theological Union includes eight seminaries—two Roman Catholic, five Protestant, and one Unitarian Universalist. In addition, the GTU features a variety of academic centers and affiliates, including the Center for Jewish Studies, the Center for Islamic Studies, the Institute of Buddhist Studies, the Patriarch Athenagoras Orthodox Institute, the Center for Theology and the Natural Sciences, and the Center for the Arts, Religion, and Education. Founded in 1962, the Graduate Theological Union is dedicated to building bridges within and across different religious traditions by educating students for teaching, research, ministry, and service. The GTU works collaboratively with the University of California, Berkeley, and is the home of the Flora Lamson Hewlett Library, one of the largest theological libraries in the U.S.