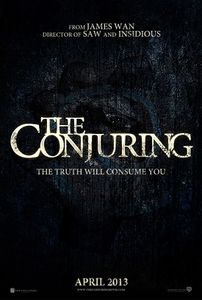 When it comes to horror films, a dash of holy water, a priest waving a cross, and some unintelligible Latin usually provide enough legitimacy to make the most demonic possessions believable to the general population. But when brothers Chad and Carey Hayes set to writing their most recent screenplay, they wanted an accurate portrayal more than dramatic. Diana Walsh-Pasulka (M.A. ’99) provided the expertise they needed for incorporating the Old Roman Rite of exorcism preferred by Ed and Lorraine Warren, the couple who famously investigated the Amityville Horror and the real life inspiration for the story. The Conjuring, set to hit theaters July 19, follows the Warrens as they explore disturbing events at a Rhode Island home.

Walsh-Pasulka, an associate professor in the Philosophy and Religion department at the University of North Carolina –Wilmington, served as the head religion advisor for the film. She specializes in religion and popular culture and Catholic history and has published on religious representations in the film industry.

“My experience working on the set was amazing.  The crew, including Director James Wan, was really pleased to have a person who was knowledgeable about the Exorcism Rite on the set. It was my first time on a movie set, and really, I had no idea who any of the stars were.  When I went home after my first day, I Googled everyone's names and about died,” Walsh-Pasulka said.

“I am proud to be a part of the whole thing. When I saw the movie at a pre-screening, I was utterly amazed that the whole crew got the theology right, throughout the whole film. They would definitely earn an A+ in my class.”

Although Walsh-Pasulka was also tapped to assist with the Latin pronunciation for the exorcism scene, she felt more comfortable turning that task over to a former student of hers, Christopher Moreland. Moreland is currently a doctoral student in History specializing in Post-WWII Catholicism. She explained, “He’s been attending Latin Mass and been studying it more recently than I. Plus, Chris' voice sounds more like Patrick's [Wilson] than mine, so it made sense.”

Walsh-Pasulka and Moreland are not first to use their skills in such a fashion. Michael Morris, O.P., Professor of Religion and the Arts at Dominican School of Philosophy and Theology, researched and located a period appropriate Roman Rite exorcism for Bram Stoker’s Dracula. You can see a page of the book he procured for the scene on film.

Moreland observed of the experience, “Working on this film was an example of bridging the gap between academia and popular culture. Diana has always been fascinated by the intersections between religion and the media and passed on that fascination to me when I first took her class on Great Books of World Religion in 2002 at UNCW. Hollywood has the medium; academia has the message. In the past I think that academics were hesitant to go outside of the ivory tower and may not have been able to get across their research in an approachable way.”

He does not hesitate to add that it was Walsh-Pasulka who encouraged him, among others, to attend the GTU. “She's utilized the knowledge and skills she learned here [at the GTU] in so many different arenas: the classroom, professional development, Department of Education grants, and media outreach. She is truly an inspiration to me and so many other students.”

Have an interesting tidbit to share? Tell us about it!