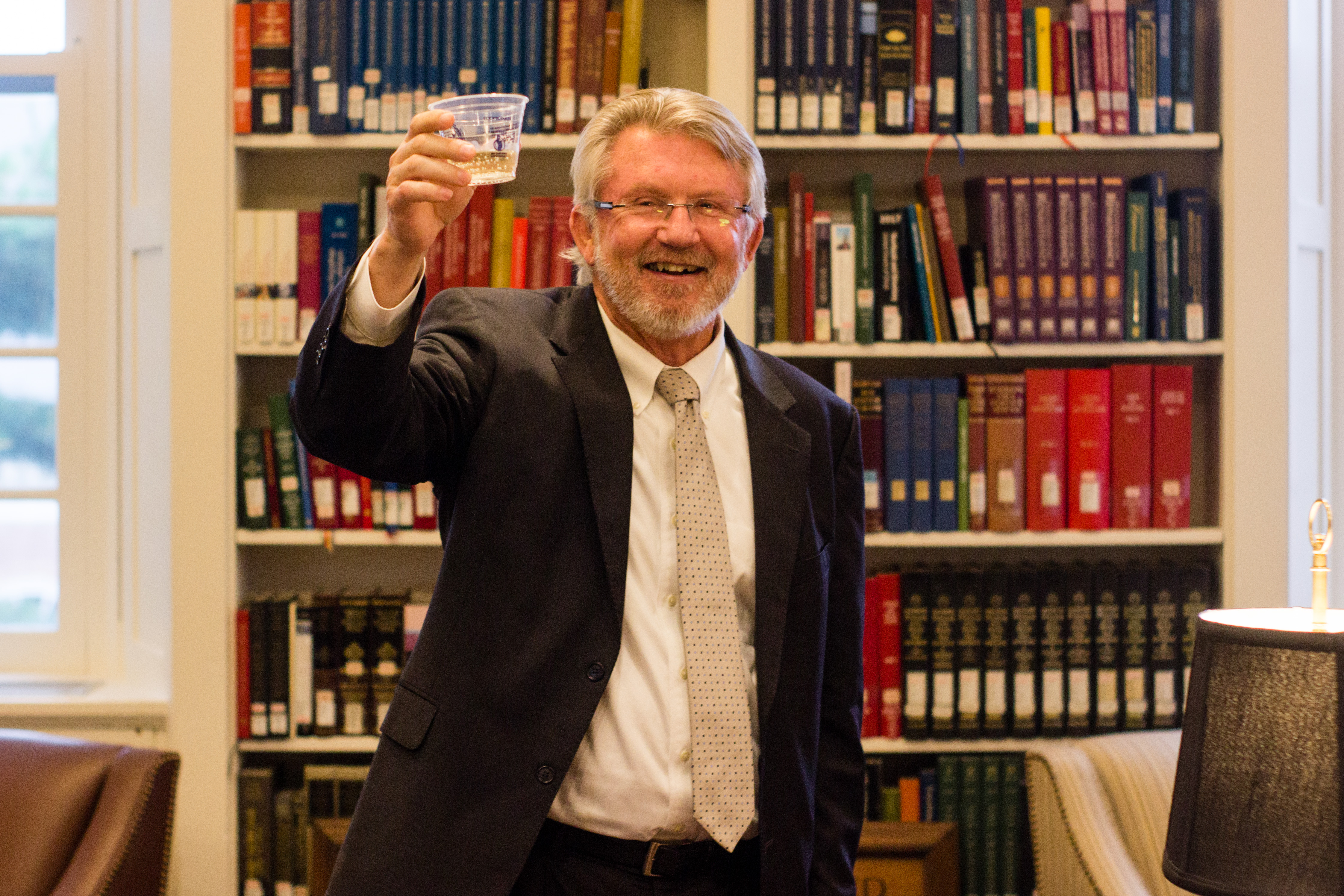 The journey that led GTU Alumnus of the Year Gregory E. Sterling to become Dean of Yale Divinity School began with a question: Where can I do the most good with my life?

When the GTU’s alumnus of the year, Dr. Gregory E. Sterling (PhD, ’90), was considering doctoral programs more than three decades ago, there were two schools at the top of his list: the Graduate Theological Union and Yale University. Eventually, he chose to attend the GTU. “The GTU offered a range of resources among the constituent schools and Cal that was inspiring,” he remembers. “The intellectual energy generated by the people and resources in Berkeley was, and is, palpable and intoxicating.”

Ironically, Sterling’s decision to attend the GTU didn’t close the door to a connection with Yale. Since 2012, the GTU alumnus of the year has been the Dean of Yale Divinity School, where he also serves as Lillian Claus Professor of New Testament. “I had no idea when I got to Berkeley what course my life would take,” he says. “I like to say that God has a wonderful sense of humor.”

“The intellectual energy generated by the people and resources in Berkeley was, and is, palpable and intoxicating.”

A New Testament scholar with a specialty in Hellenistic Judaism, Sterling has focused his academic work on the writings of Philo of Alexandria, Josephus, and Luke-Acts, as well as on the interactions between Second Temple Jews and early Christians. He is author or editor of eight books, most recently serving as coeditor of Scripture and Social Justice: Catholic and Ecumenical Essays (Lexington Books/Fortress Academic, 2018). Sterling was the general editor for the Philo of Alexandria Commentary Series (E.J. Brill), and, for twenty years, was editor of the Christianity and Judaism in Antiquity Series (University of Notre Dame Press).

Before coming to Yale, Dr. Sterling taught theology for more than twenty years at the University of Notre Dame and was named the first dean of its independent graduate school in 2008. Sterling says his decision to focus on school administration over his own scholarship was a pragmatic issue: “I asked myself: Where can I do the most good with my life? Is it in my scholarship or is it in shaping an institution? And I finally decided my life would have a greater impact by shaping institutions--and maintaining scholarship, but not devoting myself exclusively to it.”

Sterling takes pride in what has been accomplished during his tenure as dean at each school.  At Notre Dame, he helped diversify the graduate school’s student population, and worked to improve student funding and professional development. During his deanship at Yale Divinity School, the school has tripled faculty representation from underrepresented groups, added new programs, revised its curriculum, and is now beginning work toward the design of a “living village,” an innovative sustainable housing project.

While his responsibilities as dean take much of his time, Sterling maintains a love of teaching, and tries to teach at least one course each year. During 2018-19, he co-taught a course in the fall and is teaching another in the spring. “I don’t want to quit teaching,” he says with a smile. “When I walk into the classroom, it’s like a holiday, a break. It’s really fun.”

“I am grateful that we learned how to argue with one another in and outside of seminars, and then go have lunch with one another as friends. That’s a lesson that needs to be repeated in our society.”

Reflecting on his time as a doctoral student, Dr. Sterling celebrates the interreligious nature of the GTU, and the wealth of faculty resources. He highlights three scholars in particular who were most influential during his time at the GTU, and with whom he remain friends.  Father John R. Donahue, a New Testament scholar at the Jesuit School of Theology, was a mentor and priest to Sterling in Berkeley, and later became a faculty colleague at the University of Notre Dame. David Winston, former director of the GTU’s Center for Jewish Studies, introduced Sterling to the world of Philo of Alexandria, “a world that has become my own and has dominated my professional career.” Finally, Sterling acknowledges the profound influence of Eric Gruen, retired professor of the classics and history at UC Berkeley.  “To these three mentors, I owe thanks not just for the years at Berkeley but to friendships that have now extended well over thirty years and have shaped my life. . . .  I hope my life and my career is my thanks to John, and to David, and to Eric.”

Sterling also celebrates his relationships with other doctoral students. “In exceptional learning institutions, learning is always horizontal as well as vertical—and that was certainly the case for me at the GTU and UC Berkeley.” He remembers with appreciation both formal classroom discussions and conversations over coffee with colleagues in the program. “I am grateful that we learned how to argue with one another in and outside of seminars, and then go have lunch with one another as friends. That’s a lesson that needs to be repeated in our society.”

Dr. Sterling sees the flexible nature of the GTU’s doctoral curriculum as serving students best when they have a clear sense of their own goals. “I really cherished the freedom I had as a GTU student. The unstructured nature of the program allowed me to make my way on a path that was my own.”

During his time as Dean at Yale Divinity School, Dr. Sterling has encouraged several YDS graduates to pursue doctoral work at the GTU, including Pamela Stevens, who began the GTU doctoral program in 2017 after earning her master’s at YDS. Stevens notes, “While I was a student at YDS considering PhD programs, Dean Sterling encouraged me to embrace the opportunities available to me at the GTU, including the ability to take charge of my own program and the ability to take courses at UC Berkeley, which was a big part of his own experience.”

“I really cherished the freedom I had as a GTU student. The unstructured nature of the program allowed me to make my way on a path that was my own.”

Sterling notes that the GTU offers students the flexibility to pursue an almost unlimited variety of options, but such freedom isn’t well suited to every doctoral student. “Unless it’s changed a lot, I think to thrive at the GTU, you need to know what you want. No one’s going to take you by the hand and lead you around. You really need to have an idea. You can change your mind—that's fine. But you need to be able to approach people and figure things out. So I think it takes somebody who is a self-starter, somebody who will thrive in an environment where the intellectual stimuli is coming from a lot of different directions. The GTU is not at all monolithic; it's not in any way uniform.”

For Greg Sterling, the freedom to chart his own path as a GTU student has led him in directions he never would have expected. “I am deeply grateful for my experience at the GTU and for all the people who have shaped the GTU through their own lives and contributions. And I am grateful for the role of the GTU in opening up a life far richer than I had imagined.”

Doug Davidson is director of communications at the GTU.

Tags
Gregory SterlingAlum of the Year