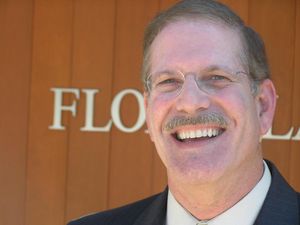 After a decade of devoted service as Director of the GTU’s Flora Lamson Hewlett Library, Robert Benedetto will be retiring at the end of February.

Benedetto came to the Graduate Theological Union in July of 2006, bringing with him nearly thirty years of professional experience as a librarian, church historian, and archivist. Under his leadership, the GTU library has expanded its online databases, provided wireless internet access in the library, improved its online course management system, created multiple points of access to digitized material from Special Collections, and streamlined its operations. To address the library’s growing collection of books and special materials, off-site storage was expanded to include American Baptist Seminary of the West and the library at Santa Clara University (SCU). In addition, a cooperative arrangement was established with SCU to allow GTU students access to its library.

GTU President Riess Potterveld celebrated Benedetto’s contributions during his time as director: “The GTU library and its exhibition spaces are key resources for GTU’s faculty and students, and serve the University of California community of scholars as well. In a time of financial challenges, Robert has devoted himself to maintaining the quality and depth of our collections. We are grateful for his effort to keep the Library aligned with the academic programs introduced by our many schools and affiliates over the years.”

Before coming to the GTU, Benedetto worked as director of special collections at Princeton Theological Seminary in New Jersey, and as associate librarian and associate professor of bibliography at Union Theological Seminary and Presbyterian School of Education in Richmond, Virginia. He has also served as an archivist with the Presbyterian Historical Society in Montreat, NC, and the Bishop Museum in Honolulu, HI.

A prolific author, Benedetto has written more than 30 published articles, and has authored, edited, or contributed to 10 books. He was the general editor of The New Westminster Dictionary of Church History, Vol. 1: The Early, Medieval, and Reformation Eras (Westminster John Knox Press, 2008) and the co-author (with Donald K. McKim) of Historical Dictionary of the Reformed Churches, 2nd edition (Scarecrow Press, 2010).

After retiring from the GTU, Benedetto anticipates a time of discernment as he thinks about new avenues of service. He expects to continue work on several writing projects, including his next book, Na Kahu: Portraits of Native Hawaiian Pastors, 1820-1900, to be published by University of Hawaii Press. “This writing, and whatever else I do, will certainly be enriched by my time at the GTU,” Benedetto reflected.

Clay-Edward Dixon, who currently serves as the Flora Lamson Hewlett Library’s Head of Technical Services and Collection Department, has been announced as Interim Director of the library.

Robert Benedetto will be honored by the Graduate Theological Union at a reception on Wednesday, February 24, between 11:30 am and 12:30 pm on the main floor of the GTU library.

The Graduate Theological Union’s Flora Lamson Hewlett Library is the largest circulating theological library in the United States. Together with its branch at the San Francisco Theological Seminary, the library holds 500,000 volumes, more than 1100 periodical subscriptions, and 295,000 non-book holdings; 6,000-7,000 new titles are added each year.