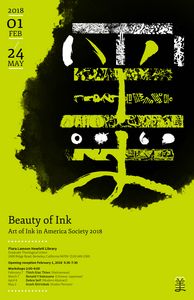 With the opening of “Beauty of Ink” at the Graduate Theological Union, the Art of Ink in America Society (AIAS) celebrates its fourteenth exhibition season. The Society is dedicated to sharing the excitement of the beauty of ink executed by the soft brush. The kanji 漢字 or ideogram that inspire the Society’s artists evolved from abstractions of objects, sounds, and ideas derived from images from the natural world. Sho 書 (as it is referred to in Japanese) can be properly referred to as abstract art; ideograms are not visual representations of objective or natural forms. The modern art of sho explores the expressive possibilities of line and space by deconstructing, reconstructing, and deforming the kanji, to experiment with the aesthetic potential of line and space. But beyond the beauty of its aesthetic forms, the art of the hand-written line reveals the spiritual station of the artist-creator. The pliant brush, free flowing ink, and absorbent paper are the tools through which the artist gives form to his or her inner life. The works on exhibit are avant-garde expressions of the traditional art of sho.

Inspired by the energy and expressiveness of Abstract Expressionism, Sun Wuk Kim (1929-2012), the founder of AIAS saw the possibilities of energizing the traditional craft of calligraphy. To this end he organized an international exhibition of calligraphy at the Korea Gallery in New York City in 1994. Dr. Kim, a physician and a student of seo서 as it is referred to in Korea, organized the next eleven exhibition cycles. Professor Yoo Sung Lee organized the twelfth and thirteenth exhibition seasons. After a brief hiatus Ms. Debra Self and I are continuing their enthusiasm for the art of sho.

A series of four workshops accompanies the exhibition on the first Wednesday of the month from 2–4pm. Participation is limited to six and an RSVP is required. Thich Giac Thien will present on Vietnamese tradition (February 7), Ron Nakasone on the Chinese-Japanese (March 7), Debra Self on modern-abstract (April 4), and Arash Shirinbab on Arabic-Persian calligraphy (May 2).

AIAS is most pleased that the Graduate Theological Union (GTU) is hosting our fourteenth season; the show will also travel to the Dharma Realm Buddhist University in Ukiah, California, and to the Bangkok Art and Cultural Centre Center in Thailand.