Dr. Ashley L. Bacchi (PhD, GTU 2015) is Assistant Professor of Jewish History and Ancient Mediterranean Religions at Starr King School for the Ministry and serves as the Faculty Chair of the GTU Women’s Studies in Religion Certificate Program this academic year. Ashley has dedicated herself to an interdisciplinary approach to Ancient Mediterranean religions and culture to break down oppressive models that enforce simplistic dichotomies and kyriarchies. In this interview, Ashley shares her response to being selected as the fifth annual Borsch-Rast Book Prize and Lecture Award recipient for her work, “Uncovering Jewish Creativity in Book III of the Sibylline Oracles: Gender, Intertextuality, and Politics” (Brill 2020), the many influences on this work, and her hopes for this project’s impact. The fifth annual Borsch-Rast Lecture will take place at 6pm (PT) on Thursday, March 31. Dr. Bacchi will be joined by Dr. Erich S. Gruen and Dr. Annette Yoshiko Reed.

GTU: Congratulations on being named the GTU’s 2021 Borsch-Rast Book Prize recipient! Can you tell us more about the motivations for your book? How did this project on the Third Sibyl come to be?

Dr. Bacchi: Thank you so much. I am so honored and excited. To be honest, I’m still in a bit of shock about it.

This book is the product of my years of study at the Graduate Theological Union, from 2008 to 2015 and then five more years of revising, editing down, adding new material, and more editing. Some aspects were first examined in my master’s thesis, new dimensions were explored in my dissertation, and in the five years after. Some areas were influenced greatly by the material I taught in my SKSM/GTU courses. It draws on training that I have received in history, Jewish studies, classics, art history, and archaeology, as well as literary and feminist theory.

In the book [Uncovering Jewish Creativity in Book III of the Sibylline Oracles: Gender, Intertextuality, and Politics], I reclaim the importance of the Sibyl as a female voice of prophecy in Book III of the Sibylline Oracles and reveal new layers of intertextual references that address political, cultural, and religious dialogue in second-century BCE Ptolemaic Egypt. This investigation stands apart from prior examinations by reorienting the discussion around the desirability of the pseudonym to an issue of gender, questioning the impact of the choice to identify the author’s message with a female prophetic figure, and challenging the previous identification of paraphrased Greek oracles and their function within the text. Verses previously seen as anomalous move from the role of Greek subterfuge of Jewish identity to offering nuanced support of monotheistic themes. This opens up questions of identity construction, gender roles, and breaks down divides between multiple academic disciplines. I am very proud of it and believe it is a true testament to my dedication to interdisciplinary scholarship and to what can be accomplished when you challenge the status quo. 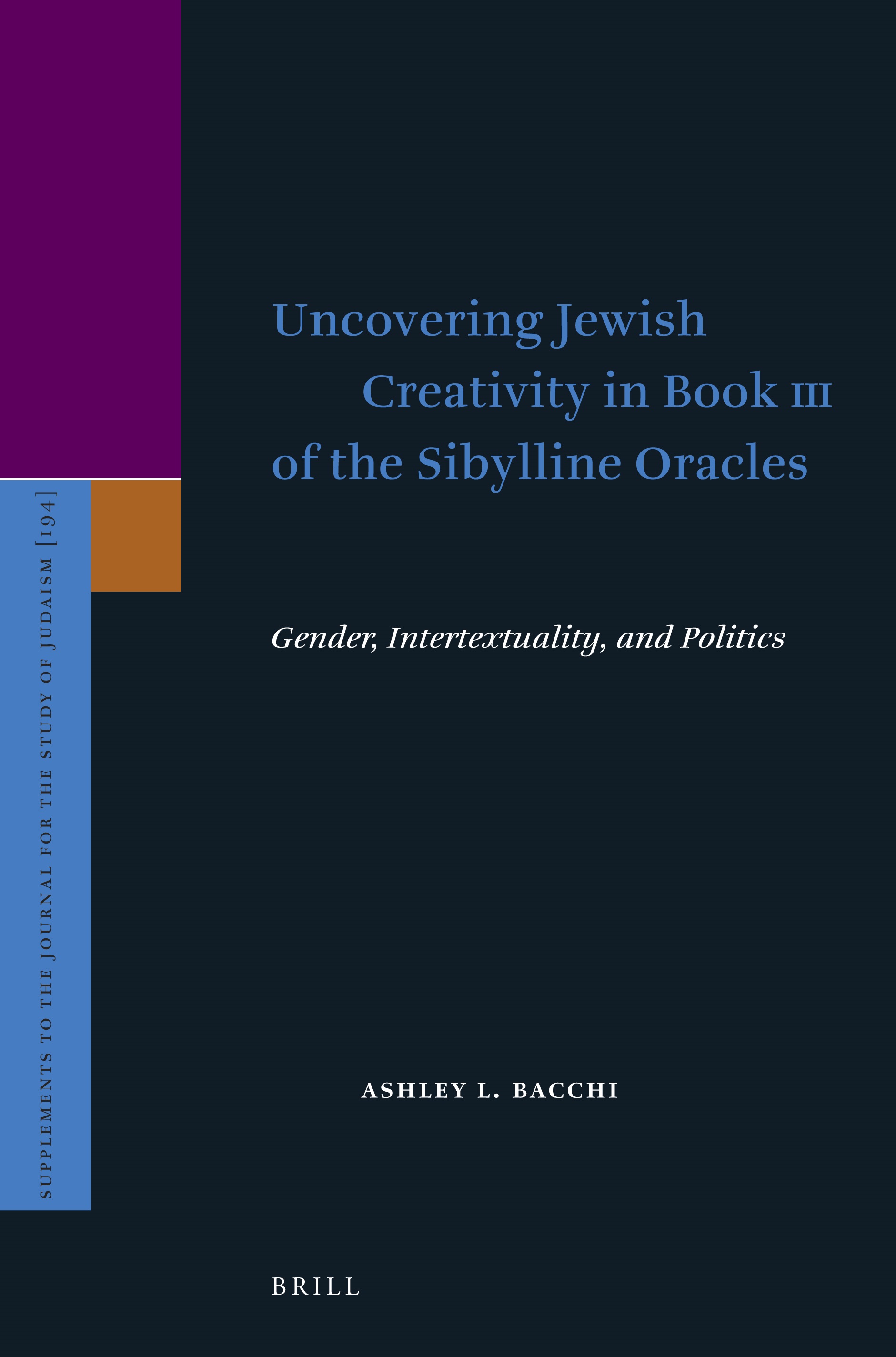 GTU: How did the GTU help shape this work, either in the classroom, in conversations with students and colleagues, or otherwise?

Dr. Bacchi: This monograph is a revised and significantly expanded version of my doctoral dissertation submitted to the GTU in 2015. I will never forget the simultaneous excitement and trepidation I felt when I first read Book III of the Sibylline Oracles in my first year of my master’s program at the GTU because so many connections and ideas were jumping out at me. For the first time I felt as if my commitment to interdisciplinary training had finally found the perfect field to exercise my skill set. I realized my academic home was Hellenistic Judaism.

I wrote my master’s thesis on these initial ideas. Soon after the completion of my master’s thesis, I shared it with Dr. Erich S. Gruen, whose work in Roman history had been a model for me since I was an undergraduate. When I first began to pursue Hellenistic Judaism, his work on Jewish literature and history again offered me a guide on how to bring a variety of sources into dialogue in a way that showcased the interconnected nature of ancient Mediterranean history.

I am also deeply grateful for the support and guidance of my dissertation committee: Dr. Daniel Joslyn-Siemiatkoski, Dr. John Endres, Dr. John J. Collins, and Dr. Erich S. Gruen. I benefitted significantly from each of their comments and several of the expansions to the arguments found in this book were first discussed as potential future pursuits during my dissertation defense.

I would not have been able to complete the book without the Flora Lamson Hewlett Library at the GTU and their abundant resources and collections, as well as the UC Berkeley Library. The collaboration between the two made my interdisciplinary research pursuits an achievable reality.

I was also immensely fortunate to have key mentors that marked each stage of my academic journey: Dr. Peter Wallace, Dr. Emily Albu, Dr. Gabriella Lettini, and Dr. Erich S. Gruen. As an undergraduate, Peter modeled how to be an historian, and he was the first to encourage me to pursue my academic dreams. As a post-baccalaureate student, Emily modeled how to be a Classicist and offered me open and honest guidance. As a master’s student, Gabriella modeled how to be a feminist scholar and activist. When others were advising me to narrow my academic focus, she advocated that I remain committed to interdisciplinary work and continue to develop my art history and archaeology skill set. As a doctoral student, Erich modeled how to integrate being an ancient historian of Greek and Roman History and Jewish History. He encouraged me to push boundaries while holding me accountable to the sources so that I could honemy techniques and develop my own academic voice. The GTU’s inter collegial environment supported and sustained these relationships.

I also learned so much by teaching for Starr King at the GTU. The discussions in my “Sex and Sin in Ancient Judaism and Early Christianity” course brought up new questions for me that had me re-examining Book III for insights that I initially had not considered. For instance, how male same-sex acts were framed within the text. This discussion was one of the additions I made to the book and in it, I argue that previous scholarship has too quickly classified the verses as simply against same-sex relations, but I argue the issue is not about sex acts but is rather a rebuke of the sexual abuse of enslaved peoples by Romans. Teaching at Starr King and their pedagogical focus on educating to counter oppressions encouraged me to explore paths that made the book stronger and more relevant.

GTU: What was most challenging for you in this project? Did you encounter any surprised in your research?

Dr. Bacchi: I am the first scholar to explore the significance of women and power in the Hellenistic world and how this inspired Jewish writers to choose the female Sibyl as their prophetic voice, claiming her as the daughter-in-law of Noah and the prophetess of the One True God. It may seem obvious to point out that the gender of the Sibyl is important, but it was actually controversial.

I received a lot of pushback from different scholars early on because it was taken for granted that the Sibyl was chosen because she was considered an authoritative Greek voice and there were no other options available to the Jewish pseudepigraphal writers that would fit the style they wished to use. It was a matter of what Suzanne M. Spencer-Wood refers to as peeling the androcentric onion:

Sometimes it was frustrating to have to do that prep work when it seemed so obvious to me and what I wanted to do was focus on the new onions of complexity that were revealed once you shifted to making gender the central draw for the Jewish Sibyllists. I was seeing connections to other literature and historical events and politics, which had implications for adding another piece of the picture of the diversity of Hellenistic Judaism. Ultimately, having to spend time with each layer of the first onion kept opening more paths for more questions and excitement for all the possibilities for discussion they would open. I had to pick and choose what to focus on in this book to lay the groundwork that I hope will lead to the Sibylline Oracles gaining more attention for the insight they still have to offer for reinforcing that gender and identity is not static, natural, or timeless, but is dynamic and constructed to fit particular communities.

GTU: Your book has been out for about a year now and is already receiving recognition and honor. How are this book’s topics of gender, interreligious dialogue, prophecy, politics, and more important for our own time and context?

Dr. Bacchi: I have brought this work to a wider audience through public talks, as well as an adult education course for a Reformed synagogue in northern California. We delved into the impact of a female prophetic voice within a male-dominated prophetic tradition, questioned traditional gender narratives, and discussed the possibilities that reclaiming Hellenistic Judaism may open up for Jewish communities today as well as for women in leadership across faith communities. The material has been extremely popular because it broadens people’s understanding of what it meant to be Jewish in the ancient world and how women were viewed in the ancient world, which helps people today feel an unexpected connection to the past.

In a time when there are so many intersecting global crises (global warming, global pandemic, rampant white supremacy, and ever-growing wealth disparity—the list unfortunately goes on), I constantly ask myself if what I study and what I teach matters, and, if it doesn’t, why am I teaching it? In the Sibylline Oracles, I have found a concern for what we would categorize today as social justice and equity issues framed against an apocalyptic backdrop. I think my book’s realignment onto gender allows for the whole Sibylline corpus to be re-evaluated for fresh insights that could speak to the anxiety and fear that we are all grappling with right now, as well as how to envision possibilities for hope.

GTU: What are your hopes for this book’s impact?

Dr. Bacchi: I hope that people see how it helps support arguments that have been made in gender studies about gender roles. I hope that it makes scholars question long-standing academic assumptions about identity that undergird much of ancient Jewish and Early Christian literature, and open themselves up to the possibilities that looking beyond constructed boundaries has to offer, whether the boundaries be religious or disciplinary.

I also hope the Sibylline Oracles become more popular so that more lenses get applied to them because they have a lot to offer. I think that the Sibyl has the potential to be claimed as an intersectional feminist symbol that could inspire new connections with the past. I know I’m not done with the Sibyl, that’s for sure.