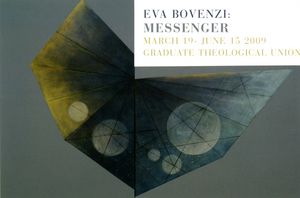 Eva Bovenzi lives and works in San Francisco and Colorado. She first exhibited in 1981. Her work is routinely exhibited in museums and galleries.

From DeWitt Cheng's review of the exhibit in San Francisco Art Magazine, May 2007:

"Yet these rich, lyrical works, for all their elegance, aim at something more difficult; they aim, I believe, in effecting a kind of psychic or emotional healing in viewers, realigning them with the world of nature (so unfashionable lately in the world of art theory); they aspire to transcendent metaphor and even spiritual elevation.

"In 1992, traveling in northern Italy, Eva Bovenzi was engrossed by the abundance of sunflowers growing in the large fields along the roads. She became aware that each individual flower with its cyclopean head appeared not only as an emblem of the sun, but that inside the halo was a huge black center, 'a heart of darkness.' In a statement for the catalogue Elusive Nature for the Cuenca Biennial of Painting in 1996 she wrote that her paintings of sunflowers "allow me to deal more directly with the themes around which my work has always circled: the dualities of matter and spirit, and time and transcendence."

"This, in effect, is a fine description of the Messenger series which she produced in 2006. There the impact of the Italian trip is even more apparent. She was deeply affected by trecento and quattrocento painting by Giotto, Simone Martini, Fra Angelico and Piero della Francesca, the experience of which left an indelible mark on her work as it developed to its present phase. Unlike many artists who, at this time, do work which is disconnected from tradition, Bovenzi has been able to create authentic painting precisely because she is aware of her patrimony (if this word is permissible for an artist who has been active in the feminist movement since the 1970s). She also speaks with admiration of 20th century artists such as Max Beckmann, Marsden Hartley, Giorgio Morandi, Philip Guston, Alice Neel and Eva Hesse. Hesse's dangling expandable hangings, fragile in structure, abstract and allusive at the same time, find an echo in Bovenzi's paintings, although they share no similarity in appearance."

For the rest of this essay and for additional information go to the Eva Borvenzi website.

The exhibit is free and open to the public during library hours at the Graduate Theological Union library from March 19-June 15, 2009. This exhibition is made possible by the Jane Dillenberger Fine Arts Endowment Fund.