Commemorating the 500th Anniversary of the Reformation 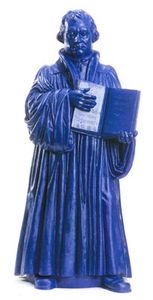 To commemorate 500 years of the Reformation, the library is exhibiting historical works by Martin Luther and his contemporaries, along with the ways Protestant anniversaries have been celebrated through the years. The exhibit cases will include a Luther Bible (1535 with hand colored prints) as well as early editions of works by Martin Luther, Philip Melanchthon, Jean Calvin, Johann Eck and others. The exhibit will run from February 13 through May 2017.

German sculptor Ottmar Hörl, has graciously lent two Martin Luther statues based on the sculpture in Wittenberg. One meter tall, these statues were originally part of the “Martin Luther – Here I stand” project. Eight hundred Luther statues were set up in the market square in Wittenberg between August 14 through September 12, 2010 while the original statue was repaired and cleaned. The artist observes that the project took Luther off his pedestal, ”to make him accessible to the masses and thus to invite the public to reassess Luther’s ideas in our time.” They have been featured in myriad celebrations in Germany since then,

The exhibition is made possible by the Jane Dillenberger Fine Arts Endowment Fund and is free and open to the public during library hours. For more information, contact David Stiver at dstiver@gtu.edu or Caryl Woulfe at cwoulfe@gtu.edu.