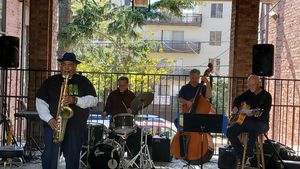 Dr. Ronald Burris, Associate Professor of Church History at the GTU, will be playing live jazz for us with his quartet outside the Hewlett Building!

Vallejo-born saxophonist Ron Burris started playing sax at an early age and continued playing through high school when he joined a band called Project Soul, which later became super group Con Funk Shun. Ron’s early years were filled with the great R&B singers and groups of his day, as well as inspiration from his family as his sister Barbara (Bobbie) sang in the church choir and his mother would sing hymns daily around the house.

With a solid background in R&B and sprinkles of gospel, Ron went on to major in Music at U.C Davis. He graduated with a B.A. in Music and followed up with a teaching credential from Sonoma State University. Ron taught music in the public school system for 10 years, while leading a jazz band that played throughout Vallejo and the Bay Area. It was during this time that his love for jazz fully took hold, after hearing Gene Ammons at the famed jazz club Keystone Korner in San Francisco. Ron also admired and was inspired by players like John Coltrane and Sonny Rollins for their technique, Stanley Turrentine for his soulful bluesy style, and Cannonball Adderley for his articulation, technique, and sound.

No need to RSVP for this free, public event – just turn up! There will be a limited number of chairs available, as well as room to sit on the grass. You are welcome to bring your own blankets and low-backed folding chairs.