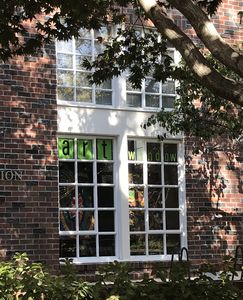 While the Doug Adams Gallery is out of use, we are using our beautiful ground floor window (2465 LeConte Ave. Berkeley) to highlight some of the Bay Area's talented artists of color! CARe’s 2020-2021 “in-person” exhibition was on view - from outside! - in the Doug Adams Gallery window from October 2020 through June 2021. Art Window has now closed -- a huge thank you to everyone who helped make this strange new exhibition format possible!

The first artist to kick off our new exhibition was Ora Clay, a quilt-maker based out of Oakland. We were honored to display two of her quilts, Bread at Midnight, and Human Rights: Article 29. Ora's use of the quilt as medium has deep roots for her. In Alabama, as a young child, she watched her mother stretch the balls of cotton they grew into batting, and soften flour sacks for backing fabric to create two-by-four quilting frames on which she crafted quilts for Ora and her siblings' beds. Fastforward to 2011, Ora's daughter took her to a series of classes at the Museum of the African Diaspora (MoAD) in San Francisco, taught by master quilter, Marion Coleman, and Ora's own quilting practice took shape,

Ora uses her quilts to tell stories by using photos, sayings, and cultural events that are relevant to her. She is a member of the African American Quilting Guild of Oakland, and her quilts have been exhibited in libraries throughout the Bay Area. Quilting not only allows Ora to create beautiful art, manipulating colors and textures, but also to draw viewers into unpacking the issues facing our world. Such issues that are shown in the two quilts displayed in October are those of slavery, oppression, and the inalienable human right to water.

In November, we were delighted to show the vibrant oil paintings of artist Elizabeth Jiménez Montelongo. A visual artist, poet, and teacher based in the Bay Area, Elizabeth's artwork is influenced mainly by her indigenous Mesoamerican ancestry, Mexika (Aztec) artwork and philosophy, Mexican culture, Chicano history, and her experiences as a woman in the United States.

Elizabeth displayed two pieces from her Euphoric Dance of the Unconquered Mind series. Textured oil paintings of Mexika dancers exude energy and power to celebrate the continued existence of indigenous dance that could not be suppressed by violence, politics, or religion. Elizabeth's paintings are based on Mexika dancers from the Bay Area who continue the traditions of indigenous Mexican dance into the 21st century, across social and political borders. These paintings honor our indigenous ancestors and local culture-keepers while inspiring a powerful, liberating vision for the future.

Our December artist was Shirin Khalatbari, an interdisciplinary artist from Iran, who recently received her MFA from San Francisco State University. She also holds an MA in Archaeology from the University of Rome. Shirin’s work confronts the entropy of memory and history.

Shirin’s site-specific installation looks at the world’s Refugee Crisis, which is only worsening during the COVID pandemic. Shirin takes, from satellite imagery, the most common routes of refugees the world over and captures them on the glittering gold background of metallic emergency blankets. The blankets are similar to the ones often given to refugees by immigration officials.

Under mentorship from Neon artist Meryl Pataky, Tahriah Rasheed’s piece was born from a collaboration between the two arts collectives See Black Womxn and She Bends. It seeks to lift up and literally illuminate the voices and stories of Black women.

Titled Breonna Taylor was Murdered by Police, this piece served to remind us that, a year after her death, justice has still not been seen by the family of the 26-year-old emergency technician who was slain by Louisville police officers as she lay sleeping in her bed. At night, the Neon light cast the whole street in a blood red glow, in keeping with the deep, painful anger held by so many in the wake of this senseless killing. That dazzling red light also, however, conjures equally raw feelings of an abiding love. Above all, Rasheed’s work serves as a reminder that Breonna Taylor may be gone from this world, but she is far from forgotten.

Tracy (茜茜) Ren is a multidisciplinary artist, maker, and curator based in Oakland, CA. She works with an architectural and object-oriented visual language through a first generation Chinese-American lens to extract levels of both personal and collective knowing and feeling through spirit, the subconscious, and the everyday.

In the making of sculpture, photography, and installation, she examines the ways in which we simultaneously and reciprocally create, activate, and are held by one another through architectural spaces, structures, and motifs, as well as symbols, rituals and everyday objects. The materials she uses reflect her subject; clay is turned to often for its ubiquitous presence in our everyday lives, its sensitivity to touch, and the alchemical nature of the ceramic process. Within her most recent work, she pairs these inclinations with an engagement in a variety of research methods to navigate the loss and reclamation of her family’s history, to break bread with ghosts.

April’s artist was Ahn Lee, a nonbinary, queer Cantonese artist and researcher from Los Angeles. Their interdisciplinary practice of ceramics, media and performance relies on a combined methodology of autobiographical re-making and research on the Cantonese diaspora. Of Sunwui (Xinhui) descent, Ahn explores their ancestral roots to this contested site of capitalism and imperialism through leveraging archival research historiography, and critical race and gender theory. Previously, Ahn studied at UCLA as a Eugene V. Cota Robles Graduate Fellow. They are currently pursuing their Master of Fine Arts degree at UC Berkeley.

Anh’s display featured translucent, 3mm-thick, porcelain PPE masks, glazed with a handmade, original Jun-inspired glaze made to look like a cloudy sky. Using the symbol of a mask, perhaps the most ubiquitous emblem to come out of the COVID pandemic, Ahn’s body of work not only reflects on the current pandemic, but also on migration, diaspora and the 1800’s concept of “yellow peril”.

Biz Rasam was born in Kabul, Afghanistan and moved to the United States at a young age. His artwork seeks to humanize the Afghan culture, something he sees a great need for, particularly in the wake of 9/11. His ambition to represent the Afghan-American experience has led him to pursue an MFA at UC Berkeley.

Biz’s May exhibition featured artwork inspired by 14th-century Islamic miniature painting. His latest research has focused specifically on the miniatures of Persian painter Kamāl ud-Dīn Behzād. Many of the subjects Biz draws out in his own work focuses on battle scenes and depictions of religious worship, as he finds these to be the most relevant topics to Afghan life today.