Before the GTU and its library came into existence, the seminaries of the Bay Area and of California engaged in a number of cooperative library programs. The earliest cooperation began around the turn of the century as denominations located their seminaries in Berkeley to be close to the University of California, and its educational and library resources. The Western Theological Library Association was begun in 1954 by J. Stillson Judah, Librarian of the Pacific School of Religion. Cooperative projects included union catalogs and periodical lists.

The GTU was incorporated in 1962. In 1963, Dean John Dillenberger appointed a GTU Library Committee. A consultant was called in to study and report on library needs for the member institutions. The "Tanis Report" provided three alternatives for library facilities. The Committee's decision was for one of the alternatives, and established the GTU Bibliographical Center in 1964. The Center was not a library, but performed specific functions for the GTU member schools' libraries. Operating from the building at 2465 LeConte, the Center created a union catalog, assembled a reference collection, and set up procedures for cooperative book selection, ordering, and cataloging. 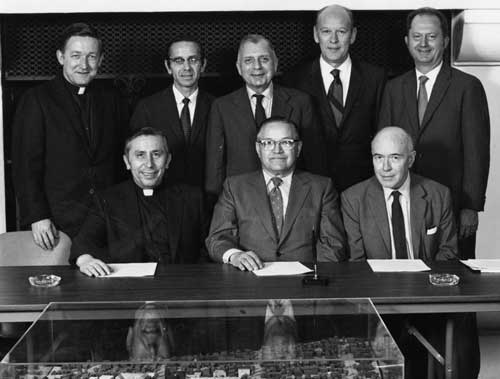 The Library Committee continued to plan and negotiate. In 1969, the GTU Common Library was established and moved into temporary quarters in the basement of the Church Divinity School of the Pacific. J. Stillson Judah was appointed Librarian. Seven schools signed the agreement (Pacific School of Religion joined in 1980, and Starr King School for the Ministry in 1982). The staff of the new library faced the daunting task of integrating seven separate library collections. This procedure was complicated by the existence of several different call-number schemes, and numerous duplicate copies of books.

Plans continued for the needs of the Library and the GTU. The site for a new library building at the corner of Ridge and Scenic was purchased from the American Baptist Seminary of the West and the San Francisco Theological Seminary. The lot was known as the "Wilson Property". Under Dean and President Claude Welch, the new building was envisioned as a major physical symbol of the common effort of the Graduate Theological Union.

In 1972, the architect, Louis I. Kahn was chosen to design a library and administration building. Kahn's architectural philosophy understood the needs of the client and the purpose of the building, but also stressed the art of his work. He saw a building as an environment of space and light, and as the personification of the nature and purpose of its use. He was very interested in expressing the inspiration to learn and to question in institutions of learning and of religion. These were the ideas he brought to his work for the GTU Library. (The drawings for Louis Kahn's original design for the library are at the Architectural Archives of the University of Pennsylvania.) Kahn completed preliminary designs, but died suddenly in 1974. The GTU then selected the architectural firm of Peters, Clayberg and Caulfield, in association with Esherick, Homsey, Dodge, and Davis, to carry on the project Kahn inspired.

The process for building permits was difficult. Neighborhood and student groups opposed the new construction. After many delays, permits were granted, the existing structure demolished and the site prepared. It was now 1979, and the building fund was not enough to cover the cost. The GTU Board of Trustees decided to build the library in two Phases. Phase I construction consisting of the basement and Level I began in 1979, and was completed in 1981. Judah had retired and John Baker-Batsel was appointed Librarian in 1977. Under his direction, volunteer crews of students, faculty, trustees, and staff moved approximately 300,000 volumes from the Church Divinity School of the Pacific basement and from the Pacific School of Religion library into the new half-completed building.

Michael Blecker became President in 1982 with a mandate to complete the building. He mounted a capital campaign to raise funds. Phase II construction of Levels II, to complete the Library, and III, to house GTU administration offices, began in 1985 and was completed 1987. Acknowledging a substantial contribution from the Hewlett Foundation, the GTU Common Library was named the Flora Lamson Hewlett Library in May 1987.

The next major project for the Library was automation. The Library joined RLIN (Research Libraries Information Network) when it began in 1977. This is a national library cataloging database. Acquisitions began automated ordering in 1986. On John Baker-Batsel's retirement, Mary Williams became Library Director in 1990. The on-line catalog, named GRACE (GTU Reference Access Catalog Experience), was opened in 1992. When circulation functions went on-line in 1993, library automation was complete. In 1998, the library changed bibliographic utilities, dropping RLIN and subscribing to OCLC.

After Williams' retirement in 1997 and an extensive search, Bonnie Hardwick was appointed Director in 1999. An ever-growing collection and ever-advancing technological innovations necessitated renovations in the library, 2000-01. Compact shelving was installed on Level I to increase available shelving. A Teaching Lab was built on Level II providing Library staff and GTU faculty electronic classroom capabilities using advanced technological teaching tools.

Robert Benedetto succeeded Hardwick as library director in 2006. Under his leadership, the library expanded its online databases, provided wireless internet access in the library, improved its online course managment system, created multiple points of access to digitized material from Special Collections, and streamlined its operation. Off-site storage was expanded to include American Baptist Seminary of the West and the library at Santa Clara University (SCU) to address a growing collection of books and special collection materials. A cooperative arrangement was made with the SCU library to  provide GTU students with access to their books.

In 2017, Clay-Edward Dixon,  long-time collection development librarian, became the library director.  Under his interim leadership, the teaching lab was updated to a state of the art Collaborative Learning Space, the online catalog moved from a local server to the cloud, and two successful exhibitions (Celebrating the Life and Work of Fr. Michael Morris, OP, and Commemorating the 500th Anniversary of the Reformation) were held in the library.

Additional information and images can be found at our Digital Library site.