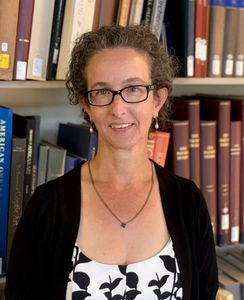 On the occasion of being named the Director of Library Services at the GTU’s Flora Lamson Hewlett Library, the GTU held an extended conversation with Colyn Wohlmut to learn what led her to this role, what inspires her passion for library services, and what excites her about the Hewlett Library’s future. Our exchange has been lightly edited for length and clarity.

GTU: What were the formative influences in your life—people, places, experiences—that led you to where you are today? Did you grow up loving books and spending time in libraries?

Colyn Wohlmut (CW): My first boss in a library, Mary Jane Parrine, who taught me to slow down, that things in libraries take time. As a product, libraries are a qualitative endeavor. We’ve all seen in the last few years how damaging the idea that “more information is better” can have on public discourse when there isn’t the equal work of evaluating sources. Quality above quantity, every time for me.

The first Reference Librarian I worked with: Eric Heath. He went to library school to avoid both the draft and moving to Canada. He was the most brilliant reference librarian I’ve ever met. At Stanford, he categorically refused to be promoted. Decade after decade they tried to move him up the ladder, but he insisted that he didn’t want to work in management or to head a department. He really just wanted to do the hard work of Reference.

What I learned from these influences was the value of dedication. Also, I learned that work is work, it’s not personal. Each of them showed me that working together toward institutional goals with a unified vision is the only way to succeed in a service-oriented business like libraries. The more we understand each other’s work and role, the more resilient we can be as a team.

As to my upbringing, indeed, we were a literate and cultured household — we spent countless weekends in the Fine Arts Museums in San Francisco, where my mother was a docent. She taught my brothers and I to read well before we started school. Unlike my brothers, I much preferred television to books.

It wasn't until I encountered the Mahābhārata in my late twenties that I really started reading. I fell in love with the epic. They say it’s larger than the Illiad and the Odessey put together, and I've read 2.75 complete translations. I say 2.75 because my favorite, the last one I picked up, was started by a man named P. Lal who died in 2010 with the Śanti Parva incomplete. He would host readings of his work in Kolkata. I think one of the things that makes his work so alive is he was very in touch with the epic as an aural, not written, tradition. In 2015, they found someone to fill in the gaps. As good as it is, it’s just not the same.

GTU: You have a remarkably diverse background working in libraries, on both sides of the Atlantic. What have been some of the personal highlights for you?

CW: I got to plan an event for the anniversary of Fairchild Semiconductor in which I heard Gordon Moore himself say we were coming up on the limits of Moore’s Law. That was pretty amazing, for 2007. Moore’s Law describes the relationship between transistors and the integrated circuit, but basically observed the phenomena that computational processing capacities doubled every two years during a lot of the history of microcomputing.

Another would have to be the Patmos Workshops on Historic Bindings in Greece. I attended three of their workshops on Patmos, which took place in the conservation studio at the Monastery of St. John the Theologian. It’s one of those amazing places in the Greek Orthodox tradition which has survived as a community through centuries of political and religious strife in the world around it.

Working at the Sutro Library was also a fantastic experience. It’s one of the most underappreciated collections in the Bay Area. They have everything – Shakespeare’s First, Second, Third, and Fourth Folios, several Napoleonic works, including Les roses and Description de l’Égypt, a massive 33-volume elephant folio imprint, and one of the premiere collections of New World early printed books in the US: The Tlatelolco Collection. That just skims the surface; everything from a cuneiform tablet to Adolf Sutro’s microscope is there.

Mattie Taormina, the Principal Librarian, taught me a tremendous amount about professionalism and librarianship. And when I say “they” have these treasures, I really mean “we,” as they are part of the California State Library. Sutro wanted his personal library to be housed in and available to the people of San Francisco. All Californians are the inheritors of this great collection.

GTU: What initially attracted you to the GTU and its mission?

CW: Its reputation is unquestioningly what drew me to the GTU. The GTU is an integral part of Bay Area history, and I had certainly heard about it when I was dabbling in comparative religion in my twenties.

I used to periodically check the Employment Page on the GTU’s website to see if anything had opened up. Mysteriously, before the job I finally got was ever posted, I met a former Library Director through my mom’s participation in Catholic religious life in Santa Fe, New Mexico, where she and my father had retired. Through their involvement in this community, I met Bonnie Hardwick, my Director of Library Services Great-Great-Grandmother (who served in this role from 1999 to 2006).

Its reputation is unquestioningly what drew me to the GTU. The GTU is an integral part of Bay Area history . . . To be a part of the GTU now, when the interreligious focus has really come into its own, is thrilling.

To be a part of the GTU now, when the interreligious focus has really come into its own, is thrilling. The opportunity to engage in pluralistic dialogue is such a treasure, particularly with the political environment we have right now. It’s especially evident in the library, where we get to see so many books from so many traditions come through the process of getting them ready for the shelves. It’s a special treat for me to carve out time on to skim through the new acquisitions.

GTU: What does being named GTU’s Director of Library Services mean to you?

CW: I’m keenly aware of the lineage of which I have now become a part. When I was Head of Collection Development, often times patrons would come to me with a list of books we “had to buy,” declaring we had none of them. In every case, we already had 95 to 98 percent of them; they just hadn’t checked the library catalog. I would always smile to myself and say that’s because my predecessors had been well resourced and were all excellent at their jobs. It’s the same thing now.

I follow in a long line of Library Directors who valued research, scholarship, teaching, and learning, but who desired above all to preserve the history of theological thought and its present manifestations. I’m talking about millennia of thought, lest you forget. This means that being named Director carries with it the responsibility of ensuring that the theological discussion can continue centuries into the future, without losing sight of a single heretic, truth claim, doctrine, ritual, or scripture as it relates to our member schools, centers, affiliates, or any of those with whom they debate.

Undoubtably, that’s hard to do when space and funds are dwindling. It’s basically an impossible task – I feel that makes it a bit like devotional life. The ideal is recognized, which inspires and forms the center of our efforts, but we can’t help but fail to reach it. The job, really, is to keep trying again and again to rise above any setbacks and keep the ideal.

The chance to work to build the Library, not just for today, based on specific temporal needs, but for the future – for the faculty and students who will come 20, 50, 100 years from now – in concert with this talented, dedicated, and accomplished community of scholars is terrifying and humbling. I am unquestionably humbled by the confidence my friends and colleagues at the GTU have placed in me.

I’m keenly aware of the lineage of which I have now become a part. When I was Head of Collection Development, often times patrons would come to me with a list of books we “had to buy,” . . . In every case, we already had 95 to 98 percent of them . . . I would always smile to myself and say that’s because my predecessors had been well resourced and were all excellent at their jobs. It’s the same thing now.

GTU: What excites you about the future of GTU’s Library and its services at this time of tremendous and swift change for theological higher education?

CW: What’s exciting about the future of the Library is how much faculty and students have stepped up to have input into how the process will evolve. We are interdependent – without faculty and students there isn’t a need for the Library, and without the Library the faculty and students won’t have much ability to situate and integrate their original scholarship within the global theological corpus. I know that the Library sits at the heart of the academic endeavor, and I’m thrilled that the response I’ve received from faculty and students shows me that they know this, too. The ability of the collection to expand in one area and contract in another is guided exclusively by the work of our scholars, past, present, and future.

I know that the Library sits at the heart of the academic endeavor, and I’m thrilled that the response I’ve received from faculty and students shows me that they know this, too.

Of course, none of this would be possible without our team of dedicated staff. Despite having started in 2018, I’m the ‘newest’ addition to the team. In that time, I have seen us pull together and meet some significant challenges – both as individuals in their departments and the team as a whole. We are pulling our talents together and adapting service to meet these challenging times, hopefully in a way that is seamless for our patrons.

Please stop in and let us know how we’re doing.