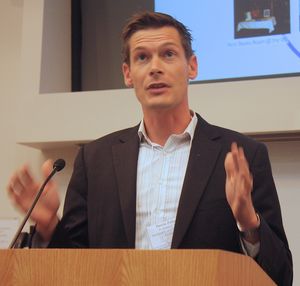 I'm an associate professor of American Studies, Religion, and Literature at the GTU, and also presently the Chair of the Department for Historical and Cultural Studies of Religion. I teach in our PhD program's concentrations for Art & Religion, New Religious Movements, and Religion & Literature. My position is housed at the GTU's Center for Swedenborgian Studies (CSS), and much of my teaching and research remains focused on the nineteenth-century cultural reception of the Scandinavian scientist-turned-mystic, Emanuel Swedenborg (1688--1772). I have also been a member of the Public Theology Inquiry Group at UC Berkeley's Center for the Study of Religion.

Prior to coming to Berkeley in 2011, I taught at the University of Osnabrück and the Ludwig Maximilian University of Munich, both in Germany, and at Queens College in New York City. I've been a fellow, scholar-in-residence, or visiting research professor at the Eccles Centre for American Studies at the British Library (London), at the Wabash Center for Religion and Theology at Wabash College in Indiana, in Stockholm University’s Department for Aesthetics and Culture (Sweden),  at the Mesa Writer's Refuge in Point Reyes, California (with the Gardarev Center), and at the Rachel Carson Center for the Environment at the Ludwig Maximilian University of Munich. In 2016, I was also a scholar-in-residence at the former estate of the film director Ingmar Bergman on Fårö island (Sweden).

I welcome inquiries from students interested in working on MA and PhD projects related to religion & literature and/or religion & the arts (particularly within Romanticism and the "long" nineteenth century), western esotericism and New Religious Movements, and the environmental humanities broadly construed (ecocriticism, eco-art).