Why Study the Quran? A Conversation with Joseph Lumbard & Zaytuna Faculty 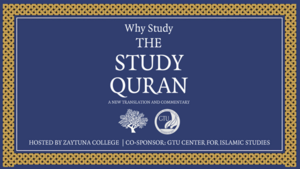 The Study Quran, edited by a team of scholars led by Seyyed Hossein Nasr, is one of the most significant English-language publications about Islam in recent memory. For the first time, English readers can access the rich stores of interpretive scholarship on the Quran through a curated synthesis of forty classical tafsirs in the legal, spiritual, and theological traditions of both Sunni and Shi’i Islam. In addition, the work features a number of important thematic essays from leading scholars, including Ingrid Mattson (“How to Read the Quran”), William Chittick (“The Quran and Sufism”), and Hamza Yusuf (“Death, Dying, and the Afterlife in the Quran”).

Still, any project of this scale and ambition inspires thoughtful questions. Can Muslims view it as a devotional text if it doesn’t fully represent any single tradition within Islam? Should readers who are not Muslim view the book as an objective source about Islam even if it eschews Western academic approaches to the study of the Quran? As a work produced by Muslim academics for specialists and students, as well as for Muslims and the broader public, does it shift authority away from “traditional” scholars when it comes to understanding the Quran and Islam in the modern world?

Join us for what promises to be a compelling public conversation with Joseph Lumbard, a general editor for The Study Quran, Dean of Faculty Mahan Mirza, and a group of Zaytuna’s faculty. Conversation will be at Zaytuna College, 2401 LeConte Avenue Berkeley, CA. A book signing will follow the conversation.