Two Women, a Palestinian and a Jew, and their Struggle to Build a Shared Society 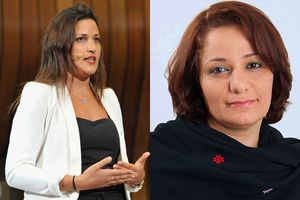 The Richard S. Dinner Center for Jewish Studies and The American Friends of Wahat Al-Salam/Neve Shalom brings you

Two Women, a Palestinian and a Jew, and their Struggle to Build a Shared Society

Engage in converation with Samah Salaime and Noam Shuster Eliasi members of the Neve Shalom/Wahat al-Salam community, the only community where equal numbers of Israeli Palestinians and Jews live and educate their children together, bringing their courageous vision to the rest of the country through the work of the Primary School, the School for Peace, the Peace Museum, and the Pluralistic Spiritual Community Center.

Thousands of students, teachers, facilitators, parents, seekers, artists, and community members work together and alone, on the front lines, to equality, offering the vision of a courageous, peaceful response to violence.

Samah Salaime is a member of Wahat al-Salam/Neve Shalom and is the founder of AWC-Arab Women in the Center, an NGO active in the cities of Ramla, Lod and Jaffa combating violence against women particularly in Arab society. This year, Samah was chosen by the Israeli newspaper Yediot Achronot as one of the 10 most influential social activists in Israel. She received her Bachelor's and Master's Degrees in Social Work from The Hebrew University and is a graduate of the prestigious Mandel School for Educational Leadership. Follow this link for an interview with Samah Salaime.

Noam Shuster Eliassi grew up in Neve Shalom/Wahat al-Salam where she attended its bilingual/bicultural school and is fluent in Hebrew, Arabic and English. She received her Bachelors degree in International Relations from Brandeis University, worked with youth in Rwanda and was awarded the "Davis Peace Prize" for the peacebuilding programs she developed for HIV positive youth in Kigali. Since 2012, she has been a coordinator at Interpeace-Israel, a joint UN program working with populations excluded from the peace process. Follow this link for a video of Noam Shuster Eliassi.

The American Friends is a 501c3 not-for-profit organization, governed by a Board of Directors and dedicated to dialogue, cooperation and a genuine and durable peace between Arabs and Jews, Palestinians and Israelis by supporting and publicizing the projects of Neve Shalom/Wahat al-Salam. Please visit our website http://oasisofpeace.org/