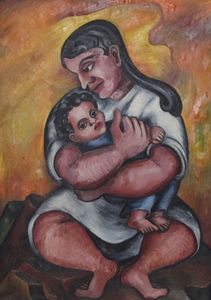 The works of Sylvia Ludins (1909-1965), an artist who last exhibited 70 years ago,  are on display in the library of the Graduate Theological Union. The exhibit will run through Sept 15th, 2016.

Sylvia Ludins, the daughter of Russian Jewish immigrants, was an activist and artist in the Thirties and Forties in New York City. Her paintings and watercolors show the political commitment and strong visual impact of the day. Her themes  include the flight of refugees, poverty, and Jewish religious subjects. Upon moving to California, her work turned to landscape as well as abstraction. Her paintings and watercolors were shown at the Brooklyn Public Library, the YWHA, ACA Gallery and the Riverside Museum in New York in the 1940s. Since then, her work has mostly been in storage and has not been exhibited for years. Ludins died in Kentfield in 1965, at the age of 56.

For additional information see a short video featuring her nephew, Jon Katz, and a website dedicated to her work.

Nicholas Ukraniac curated the exhibition with assistance from Peter Selz and Justin Cronkite. Funding for the exhibition was provided by the Jane Dillenberger Fine Arts Endowment.