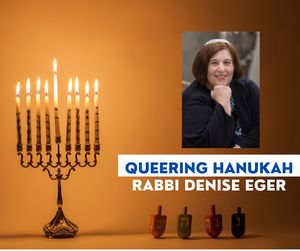 Click here to join this online CLGS event via Zoom!

Hanukah is so much more than a pale attempt at Jewish Christmas! This Jewish festival commemorates the success of a guerilla war for minority religious freedom by Judean partisans against the might of the occupying Greco-Syrian Empire over two thousand years ago.  It is interesting, but coincidental, that Jews celebrate a holiday marking the importance of religious diversity and freedom for minorities at a time of year devoted to the holy season of the majority religion, Christianity.

Hanukah has its own queer meanings!

Join Rabbi Denise Eger, an LGBTQ pioneer and leader, as she unpacks the hidden and counter-mainstream aspects of Hanukah.