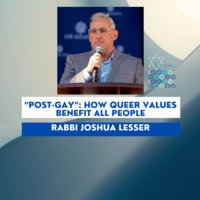 Ten years ago, a prominent Jewish Gay historian wrote an article in a major Jewish newspaper about the “dim” future of LGBT synagogues.  As a sign of their “demise,” Congregation Bet Haverim in Atlanta was called a “Post-Gay Synagogue.”  When the congregation’s rabbi, Joshua Lesser, read the article, he felt the sting of this critique. Upon greater reflection, he wrote a groundbreaking and still cutting-edge essay redefining “post-gay” as a positive force in the LGBTQ and Jewish communities.  This High Holy Day season, Rabbi Lesser will reflect on whether “post-gay” is a form of assimilationism or a way to demonstrate how queer values benefit everyone.

Rabbi Joshua Lesser, an Atlanta native, recently transitioned from Congregation Bet Haverim’s Senior Rabbi to Rabbi Emeritus. He is the former chair of the City of Atlanta’s Human Relations Commission and currently serves on the Mayor’s LGBTQ Advisory Board and their Trans Affairs Committee.

Recently, he began working with The OnBeing Project and their Social Healing Fellowship, where he is serving as faculty and as the Spiritual Director to the social healers. Joshua was named one of The 36 Most Inspiring Rabbis by the Forward and one of The 100 Most Influential LGBTQ Clergy by the Huffington Post. He is proud to have been the rabbinic editor to the groundbreaking LGBTQ Torah commentary, Torah Queeries.