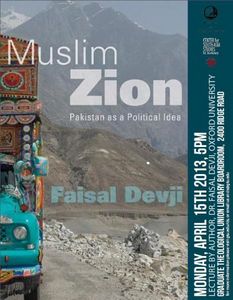 "Muslim Zion: Pakistan as a Political Idea," lecture by Dr.Faisal Devji, Oxford University
Location: Dinner Boardroom (3rd Floor), GTU Library 2400 Ridge Road, Berkeley, CA.
Click here for directions.
Faisal Devji is University Reader in Modern South Asian History at St. Antony’s College, University of Oxford. He has held faculty positions at the New School in New York, Yale University and the University of Chicago, from where he also received his PhD in Intellectual History. Devji was Junior Fellow at the Society of Fellows, Harvard University, and Head of Graduate Studies at the Institute of Ismaili Studies in London, from where he directed post-graduate courses in the Near East and Central Asia.
Devji is the author of three books, Landscapes of the Jihad: Militancy, Morality, Modernity (2005), The Terrorist in Search of Humanity: Militant Islam and Global Politics (2009), and The Impossible Indian: Gandhi and the Temptation of Violence (2011). He is interested in the political thought of modern Islam as well as in the transformation of liberal categories and democratic practice in South Asia. Devji’s broader concerns are with ethics and violence in a globalized world, particularly with the thought and practices of Mahatma Gandhi, who was among the earliest and perhaps most perceptive commentator on this predicament of our times.
Tags
CIS | Center for Islamic StudiesIslamBook