Michal Lemberger: "Women of the Bible: After Abel and Other Stories" 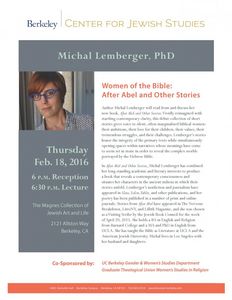 Center for Jewish Studies is hosting author Michal Lemberger; she will read from and discuss her new book, After Abel and Other Stories. Vividly reimagined with startling contemporary clarity, this debut collection of short stories gives voice to silent, often-marginalized biblical women: their ambitions, their love for their children, their values, their tremendous struggles, and their challenges. Lemberger’s stories honor the integrity of the primary texts while simultaneously opening spaces within narratives whose meanings have come to seem set in stone in order to reveal the complex worlds portrayed by the Hebrew Bible.

In After Abel and Other Stories, Michal Lemberger has combined her long-standing academic and literary interests to produce a book that reveals a contemporary consciousness and situates her characters in the ancient milieus in which their stories unfold. Lemberger’s nonfiction and journalism have appeared in Slate, Salon, Tablet, and other publications, and her poetry has been published in a number of print and online journals. Stories from After Abel have appeared in The Nervous Breakdown, LitroNY, and Lillith Magazine, and she was chosen as a Visiting Scribe by the Jewish Book Council for the week of April 20, 2015. She holds a BA in English and Religion from Barnard College and a MA and PhD in English from UCLA. She has taught the Bible as Literature at UCLA and the American Jewish University. Michal lives in Los Angeles with her husband and daughters.

Michal Lemberger: "Women of the Bible: After Abel and Other Stories" is co-sponsored by Graduate Theological Union Women's Studies in Religion and UC Berkeley Gender & Women's Studies Department.
**WSR certificate students can earn 2 credits for attending this event.

Where: The Magnes Collection of Jewish Art and Life 2121 Allston Way, Berkeley