"In the Margins: A Transgender Man’s Journey with Scripture." An Online CLGS Lavender Lunch with Shannon TL Kearns 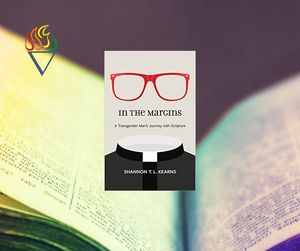 Click here to join this CLGS event via Zoom!

In this online CLGS Lavender Lunch Father Shannon Kearns explores ideas from his recently-published book In the Margins: A Transgender Man’s Journey with Scripture, which weaves together stories from Shannon’s life into reflections on well-known biblical narratives—such as Jacob wrestling with the divine, Rahab and the Israelite spies, Ezekiel and the dry bones, and the transfiguration of Jesus. In each chapter, Shannon shows how stories have helped him make sense of his own identity, and how those same stories can unlock the transformative power of faith for those willing to listen with an open mind and stand alongside him in the in-between.

Father Shannon Kearns is familiar with liminal spaces. He’s lived in them his whole life. And while his experience as a transgender man has often made it difficult for him to fit in—especially in the context of Christianity—it has also shaped his perspective in important ways on complicated, gender-transgressing aspects of theology and Scripture.

Shannon TL Kearns is a transgender man who believes in the transformative power of story. As an ordained priest, a playwright, a theologian, and a writer all of his work revolves around making meaning through story. He is the founder and Artistic Director of Uprising Theatre Company in Minneapolis, the co-founder of QueerTheology.com, and is a published author with Eerdmaan’s books.

Shannon is a recipient of the Playwrights’ Center Jerome Fellowship in 20/21 and he was a Lambda Literary Fellow for 2019 and a Finnovation Fellow for 2019/2020. He is a sought after speaker on transgender issues and religion as well as a skilled facilitator of a variety of workshops.

His work with Brian G. Murphy at QueerTheology.com has reached more than a million people all over the world through videos, articles, and online courses and community.

Shannon’s plays include Body+Blood, in a stand of dying trees, Line of Sight, Twisted Deaths, The Resistance of My Skin, and Who Has Eyes To See. He’s currently working on a television pilot.