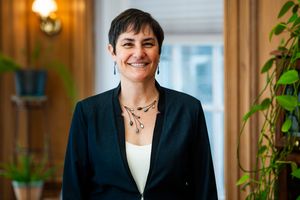 Through visiting numerous congregations (more than 50 at last count), making public appearances in person and online, and in writing for the Forward, The Times of Israel, The Philadelphia Inquirer, The Huffington Post and other news outlets, Rabbi Waxman is projecting a vision of Judaism that embraces all people and inspires Jews to be strong allies to the most vulnerable among us.

Since Rabbi Waxman has assumed her leadership role, Reconstructing Judaism has undertaken a number of major initiatives, including revising the rabbinical college’s curriculum, building even stronger relationships with congregational leadership, innovating Judaism for the 21st century, bolstering Reconstructionist Judaism’s ties to Israel and opening a second summer camp.

Rabbi Waxman has taught courses on Reconstructionist Judaism and practical rabbinics since 2002 at the college, where she is the Aaron and Marjorie Ziegelman Presidential Professor.

In 2016, Rabbi Waxman was named to the annual “Forward 50” list of most influential Jews by the Forward, a pre-eminent American Jewish publication. In naming her to this list, the Forward remarked: “In the long communal conversation over how to relate to Jews who marry non-Jews, those in the ‘be welcoming’ camp won a major battle this year, thanks in large part to Rabbi Deborah Waxman.”

This event is sponored by the GTU's Richard S. Dinner Center for Jewish Studies.