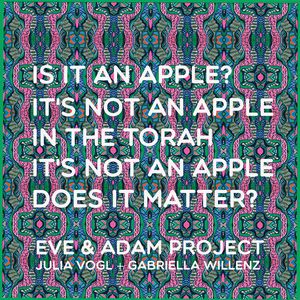 The Eve & Adam Project is a one-hour experimental, three-part audio-play. It deconstructs one of the most powerful myths of all times, the story of the first woman and man, focusing on the gender roles, hierarchy and power dynamics that the story of creation lays out. Myths are created to explain a range of observed phenomena. At the same time, many of these phenomena are social constructs based on oppressive ideologies.  With a feminist approach we are shining light on this myth to illustrate other narratives and models that empower positive gender dynamics.

This artwork moves between ancient and modern times and intertwines reality and fiction. The project presents three formats, each challenging these binaries in a unique way. Based on many interviews, we meticulously re-constructed a communal narrator; following the bible text we wrote a seven scene play, that imagines the nuances of relationships that could exist between Eve, Adam, the Serpent and G-D; and in an improvised session we asked a professional therapist to advise the characters as if they were just an ordinary couple coming to her for help.

Our project aims, beyond investigating the source text, to unpack the ways the story is taught, remembered, and transferred as its power relies on its familiarity across the world. Because this story is so deeply rooted in the structures of our society it cannot be ignored but needs thorough re-examination.

Julia and Gabriella are both conceptual artists who work intensively with visual storytelling and with collected narratives. This project will build upon their expertise in interweaving personal accounts within fictive settings. They will continue their pursuit of inviting people from the community to share their perspectives and gain agency over canonical and authoritative texts. Julia and Gabriella are both women, who are approaching the project from a feminist view point. Predominantly working with visuals, these artists are taking the opportunity to embark on a new format - of sound. Rolling Gender is designed for the pandemic world; with physical encounters limited, it will be best experienced through radio broadcasting and online platforms.

For Part Two of this series, we are joined by Dr. Mahjabeen Dhala (Assistant Professor of Islamic Studies & Director of Madrasa-Midrasha Program, GTU) and Dr. Ashley Bacchi (Assistant Professor of Jewish History and Ancient Mediterranean Religions, Starr King School for the Ministry). Both Drs. Dhala and Bacchi provided interviews for the play, and will discuss their own research and its relation to this project.

The full recording of the Eve & Adam Project will be made available to all event registrants.

Register for this free, public event!