Dillenberger Lecture, Playing the Part: Masks and the Performance of Identity in Iron Age Cyprus 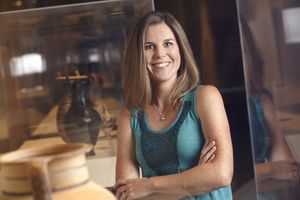 *THIS EVENT HAS BEEN CANCELLED*

Masks of many types were used in the ancient Mediterranean for a variety of purposes, from ritual performances to theatrical plays. The island of Cyprus is well known for its abundance of masks depicting primarily bulls and bearded males. Although these distinct masks have been the subject of focused studies as well as broader investigations on Phoenician and Punic masks, there has been no comprehensive and diachronic overview of this important corpus contextualized within its Cypriot setting. This talk reevaluates the evidence for masking rituals in Late Bronze Age and Iron Age Cyprus through close analysis of archaeological contexts to reconstruct masked performances. Although many of the masks reveal similarities to Levantine examples, the present evidence suggests a dynamic interplay of local and foreign customs between the two regions. The richness of masks on Cyprus, however, underscores the long tradition of masking on the island and allows us to reconstruct partially the social and religious significance of masking ceremonies. At the end of the Bronze Age through the era of the autonomous city-kingdoms, masks likely functioned as symbolic objects used in constructing social identities and can be associated with restricted groups, likely even the kings, practicing rituals at key sanctuaries. This link between masking rituals and the kingdoms becomes more apparent when the evidence for masks abruptly comes to an end in the late fourth century. Masking rituals flourished with the royal kingdoms and appear to have dramatically ended with the incorporation of Cyprus into the Ptolemaic kingdom. In the Hellenistic and Roman periods, a different mask tradition related to the Greek theater appears on the island.