Join the Richard S. Dinner Center for Jewish Studies for a talk with former GTU professor, and current GTU Scholar in Residence, Dr. Daniel C. Matt. Dr. Matt will speak about his new book Becoming Elijah: Prophet of Transformation (Yale University Press, 2022). The book explores the zealot-turned-compassionate hero, tracing how Elijah develops from the Bible to Rabbinic Judaism, Kabbalah, and Jewish ritual (as well as Christianity and Islam).

This event will be in-person, held in the Dinner Board Room of the GTU Library. In person attendance will be limited; a registration event will be forthcoming.

About the book, from Yale University Press: "In the Bible Elijah is a zealous prophet, attacking idolatry and injustice, championing God. He performs miracles, restoring life and calling down fire. When his earthly life ends, he vanishes in a whirlwind, carried off to heaven in a fiery chariot. Was this a spectacular death, or did Elijah escape death entirely? The latter view prevailed. Though residing in heaven, Elijah revisits earth—to help, rescue, enlighten, and eventually herald the Messiah. Because of his messianic role, Jews open the door for Elijah during each seder—the meal commemorating liberation from slavery and anticipating final redemption.

How did this zealot turn into a compassionate hero—apparently the most popular figure in Jewish tradition? Becoming Elijah explores this question, tracing how Elijah develops from the Bible to Rabbinic Judaism, Kabbalah, and Jewish ritual (as well as Christianity and Islam). His transformation is pertinent and inspirational for our polarized, fanatical world." 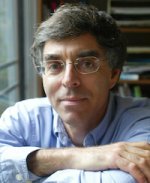 Daniel C. Matt is a scholar of Kabbalah and the Zohar. He has been featured in Time and Newsweek, and has appeared on National Public Radio and the History Channel. He has published over a dozen books, including The Essential Kabbalah (translated into eight languages), Zohar: Annotated and Explained, and God and the Big Bang: Discovering Harmony between Science and Spirituality. His most recent book is Becoming Elijah: Prophet of Transformation published by Yale University Press.

Several years ago Daniel completed an 18-year project of translating and annotating the Zohar. In 2016, Stanford University Press published his ninth volume of The Zohar: Pritzker Edition, concluding the Zohar’s main commentary on the Torah. For this work, Daniel has been honored with a National Jewish Book Award and a Koret Jewish Book Award. The Koret award hailed his translation as “a monumental contribution to the history of Jewish thought.” Daniel received his Ph.D. from Brandeis University and for twenty years served as Professor of Jewish Spirituality at the Richard S. Dinner Center for Jewish Studies at the Graduate Theological Union in Berkeley, California, where he is currently a Scholar in Residence. He has also taught at Stanford University and the Hebrew University of Jerusalem. Daniel lives in Berkeley with his wife Hana.