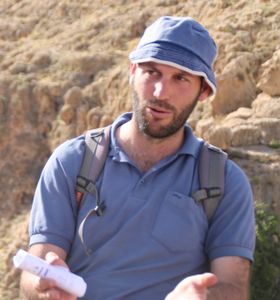 Please join us in the Badè Museum at PSR for a talk with Dr. Aharon Tavger, co-sponsored by the Richard S. Dinner for Jewish Studies at the GTU. Lunch will be provided.

"And He Called the Name of that Place Bethel" (Genesis 28: 19):
Historical-Geography and Archaeology of the Sanctuary of Bethel

The sanctuary of Bethel is the only sanctuary outside Jerusalem which is mentioned in the Bible as a central cultic place during the first temple period. According to the biblical descripion, the sanctuary at Bethel was established by the patriarchs Abraham and Jacob, and served as the royal cultic site of the northern kingdom of Israel from the times of Jeroboam until the days of Josiah. Nevertheless, archaeological excavations at the ancient ruins of Bethel failed to uncover traces of a cultic sanctuary. This talk will present a new study, which contains an historical-geographical analysis of the sources that speaks on Bethel, and a new archaeological excavation that may have solved the question of the location of the sanctuary.

Dr. Aharon Tavger is a lecturer in the department of Archaeology and the Land of Israel Studies at Ariel University. His Ph.D. dealt with the material culture of South Samaria Region during the Iron Age and the Persian Period. During the last 5 years he has been co-directing archaeological excavations at Beth-Shemesh, Bethel, and Tel Zion, along with a new archaeological survey at approximately 200 archaeological sites north of Jerusalem. He is also a senior staff member in the Tel Burna Archaeological Project. In the last few years Aharon has published more than 20 papers on various topics of the historical-geography and archaeology of Israel, and he is a co-editor of the peer-reviewed journal "In The Highland's Depth' (IHD).