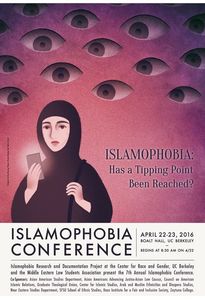 The Islamophobia Research and Documentation Project in conjunction with Center for Islamic Studies at GTU cordially invite you to their first and largest conference on Islamophobia, which is held annually on the legendary University of California, Berkeley campus.  This event includes Scholars, Researchers, Artists, Poets, Media Producers, Artists, Activists and Community Organizations to foment a multi-medium engagement with Islamophobia.

The conference’s theme, Islamophobia: Has a tipping point been reached? is both a question for researchers and a statement reflecting the pervasiveness of bigoted discourses that problematize the categories of Muslim and Islam in civil society. Certainly, the recent intensification of Da’ish’s terrorist attacks and the subsequent media coverage have contributed to the rising tide of Islamophobia and the arrival at this “tipping point” moment.

About IRDP:
The Islamophobia Research and Documentation Project (IRDP) focuses on a systematic and empirical approach to the study of Islamophobia and its impact on Muslim communities as a demonized and feared global other subjected to legal, social and political discrimination. Center of Islamic Studies at GTU is a co-sponsor of IRDP.