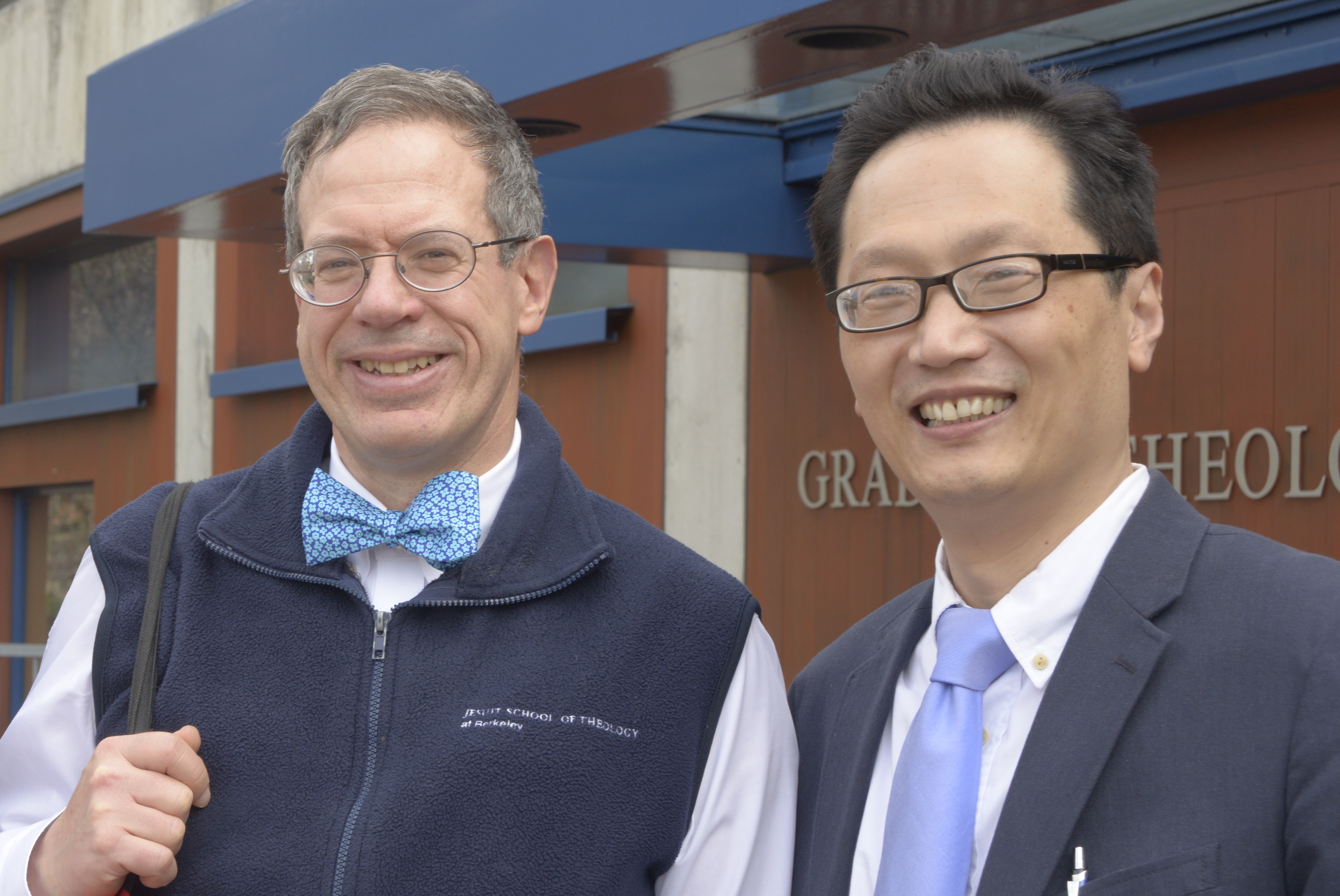 View PDF of this article

When Jean-François Racine heard he’d been selected to receive the GTU Excellence in Teaching Award at the 2018 GTU Commencement in May, he couldn’t have been more surprised. “I’d heard the list of finalists for the award, and thought, ‘Well, these are people I’ve been admiring for years. I don’t stand a chance.’ ” But his colleagues disagreed, choosing Racine to receive the honor, which recognizes a GTU faculty member for exemplary embodiment of interreligious sensitivity and commitment, interdisciplinary approach to religious studies, and creative and effective classroom pedagogical methods and performance.

Since 2002, Dr. Racine has taught at Jesuit School of Theology of Santa Clara University, where he is assistant professor of New Testament. A native of Canada, Racine earned his MA at Université Laval in Québec, and his doctorate from University of St. Michael's College in Toronto. He has written extensively in both English and French.

Although trained  as a New Testament scholar, Racine thinks of himself primarily as a theologian, understanding biblical studies as one of the disciplines within theology.  “I think theology is there to respond to questions of a specific place and time,” Racine says, emphasizing the ongoing nature of the theological task. “I don’t believe we can expect sixth-century theology or medieval theology to really respond to today’s questions. These theologies can give us models about how to think. They can show the way by addressing the questions of their own times; sometimes, they are very bold in doing so. But we shouldn’t expect a thirteenth-century theologian to answer the questions of the twenty-first century.”  Racine contends that religious scholars need to be equipped to reflect theologically on the central concerns of today.

When it comes to the field of biblical studies, Racine believes one of the most important things he teaches his students is to question interpretations. He recalls his MA thesis, which was focused on the section in the Book of Romans that urges readers to be subject to governing authorities, because authority comes from God. “For the project, I focused on the passage itself: the wording and social context of the time it was written. But as I was finishing the project, I kept looking at the history of the interpretation of that passage. In some ways, I’ve never really been out of that MA project!” Acknowledging the recent citing of the passage by U.S. Attorney General Jeff Sessions, Racine notes, “It is amazing how this text has been put to work to justify all sorts of regimes. The apartheid system in South Africa had that as one of their favorite prooftexts. So the issue of questioning the power that comes with interpretation has been a focus throughout my teaching career.”

When asked about changes he’s seen at the GTU during his sixteen years, Dr. Racine emphasized the school’s growing interreligious emphasis. “I’m really pleased that the GTU has become not just ecumenical but increasingly an interreligious institution,” he says. “When I arrived here in 2002, there was the Center for Jewish Studies, and the Institute of Buddhist Studies was an affiliate, but we didn’t have the kinds of seminars we now have in which students who are Buddhist or Islamic, or who are studying texts from those traditions, are working closely alongside students focused on the Hebrew Scriptures or the New Testament.”

Racine believes the GTU’s living fully into its interreligious identity is an ongoing task. Over the past two years as chair of the Department of Sacred Texts and Their Interpretation, Racine has seen the department wrestle with how the full inclusion of multiple faith traditions shapes their work: “The question is really how best to include people from all the traditions represented at the GTU. So those of us who were formerly in the Biblical Studies area are asking, how do we need to change our way of looking at ourselves? What kinds of things do we plan as a department to better integrate all traditions? I’m not sure we’ll ever be done figuring it out. But these are questions that weren’t even on the table three years ago.”

Dr. Racine acknowledges that the GTU community has shifted the emphases of his academic work. “Anyone who comes to the GTU and takes the culture of the place seriously will find that it shapes his or her research agenda, and I am no exception. When I came to the GTU, I was mostly a text critic. But during my time here I have become much more interested in effects of colonialism. I’ve become interested in literary studies in ways I never would have imagined, as well as in the anti-Jewish discourse within the New Testament. Questions about economy and social justice have become more important to me as I listened to my colleagues and to our students. Not that I’ve written extensively on all these subjects, but when I teach, I am far more aware of these concerns.”

Racine credits a former student in Canada with sparking his interest in biblical aesthetics, the topic of his 2013 book, Beauty and the Bible: Toward a Hermeneutics of Biblical Aesthetics. “We were studying the Book of Ruth, and one student said, ‘Oh, this passage—this is just beautiful!’ The other students nodded, but I was speechless. Because in our training in biblical studies . . . well, the word beautiful doesn’t come up at all,” he laughs. “But she was absolutely right. That is what I’d thought every time I’d read that passage. We often read poetry, including the poetry in the Bible, because it can move us. There is something beautiful in the words themselves, even in just the sounds of the words. But as biblical scholars we often put this aside and work on other questions. But if this is a well-shared effect of the text upon the readers, how do we speak about it?”

“Sometimes I think the reason I teach is because I want to learn,” he reflects. “Have you heard the saying, ‘If you are the smartest person in the room, you may be in the wrong room’? Well, since I came to the GTU, I’ve almost never felt like I’m the smartest person in the room!” he laughs. “And I think there are many different kinds of intelligence. Here at the GTU, you get all these people, with all these different backgrounds, who are all smart in one way or another. And you’re sitting in the classroom and you’re tapping into all this. That is what makes teaching here so interesting to me.”

Doug Davidson is director of communications at the GTU.