Teaching and Religion: Keys to an Equitable and Ecological Future 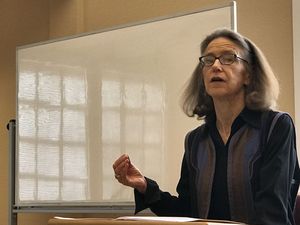 From the Spring 2018 issue of SKYLIGHT

See a PDF of this article

How can we transform our pedagogies and draw on religious wisdom to respond to the perils of climate change and climate colonialism?

We live at an unprecedented turning point in history. In light of climate change, humankind hovers on a precipice. On one side is our current path, leading toward almost unimaginable catastrophe in which those least responsible for climate change are most affected by its deadly consequences, and in which the gap between those who have too much and those with not enough continues to widen.

On the other side, however, is the potential before us. It is a world in which all people have the necessities for life with dignity, and Earth’s ecosystems flourish. Never before has humankind faced the epic choice that we now face.

Where something great is required of humankind, something great is required of its religious traditions. A basic role of religion in the early twenty-first century is to plumb the depths of our traditions for moral-spiritual power to forge a sustainable relationship between humankind and our planetary home. In this historic crucible, religious leaders and educators have a crucial role. The first essential step is to see what is really going on—in particular those realities that, for many of us, are often hidden by blinders of privilege, in this case climate privilege.

Seeing cruel realities in which we are implicated requires courage. Seeing in ways that build moral power rather than despair or powerlessness requires wisdom. Courage and wisdom begin with facing truth: The human species—or rather the high consuming among us—has, through climate change, become a threat to life on Earth. The credible scientific community is of one accord about this reality.

Less widely accepted, however, is a corollary point of soul-searing moral import. It is this: In general, the people most devastated by climate change are not causing it. The race and class dimensions of this injustice are stark. While caused primarily by high-consuming people, climate change is wreaking death and destruction first and foremost on impoverished people who also are disproportionately people of color. The island nations that will be rendered unlivable by rising seas, subsistence farmers whose crops are lost to climate change, and many coastal people without resources to protect against and recover from the fury of climate-related weather disaster are not the people largely responsible for greenhouse gas emissions. Nor are they, for the most part, white.

Some time ago, I was invited to India to work with seminary leaders on matters of eco-justice. They gently encouraged me to re-see climate change as climate colonialism. “Climate change,” declared one high level Indian religious leader, “is caused by the colonization of the atmospheric commons by the powerful nations and the powerful within [them]…However, communities with almost zero footprint bear the brunt of the consequences.” Climate colonialism and climate debt are terms arising from the Global South to describe this injustice.

The World Bank warns that drought-affected areas will increase to nearly half of global cropland by 2100, with sub-Saharan Africa and south Asia hit hardest. Let it sink in: With drought, in food-vulnerable areas, death stalks.

Rising seas could threaten more than 25 percent of Africa’s people and drown some island states and low-lying coastal areas. This means hundreds of millions of climate refugees. No less alarming: Desertification, which will strike hard in the Arab world and southern Africa, provokes war. It was a factor in the Darfur conflict. The U.S. Department of Defense identifies climate change as a foremost security threat to the United States.

The impact of climate change damage on the world’s already vulnerable people is stunning. Yet the cause of this disaster is the uncontrolled release of greenhouse gasses, especially by high-consuming societies like ours. Courageous seeing reveals the unbearable: Just by housing, feeding, clothing, and transporting ourselves, we are killing. By doing nothing or little, we actively bring on the catastrophe.

This brutality is intricately intertwined with even the most beautiful moments of our lives. The beauty of my flying to see my new grandbaby spews forth tons of carbon dioxide. The work we do here at the GTU is beautiful, yet so many of the tools we use daily—the computers, our clothing, the roof over our heads—are linked to petroleum and, as such, contribute to climate change.

In short, the current human population faces dangers unknown to all who came before us. But that is only half the story. For our time is also magnificently ripe with potential for dramatic social change toward a world of ecological sanity and social equity. This will require radical change in how we live at all levels of social organization: household, the corporate world, institutions of civil society, government.

Such change will entail profound shifts in how we teach and learn, as well as how we draw on the wisdom of our religious traditions—and that speaks directly to our work here at the GTU. I would argue that in the crucible of climate colonialism: 1) how we teach and learn matters tremendously; and 2) the world’s religions have a role to play that is of life and death import.

As we consider teaching in light of the urgent demands of climate change and climate injustice, we face a paradox. On the one hand, a large sector of U.S. society does not “get it.” Many people fail to realize fully the magnitude of the climate disaster; the dynamics of race, class, gender, and global North privilege determining who will suffer and die; the mortal danger that the corporate- and finance-driven global economy presents to the atmosphere; and the physical impossibility of this global economy as we know it continuing. Those who fail to recognize these factors will do little to address them.

On the other hand, when we begin to “get it,” when denial or ignorance is overcome and awareness dawns, a disabling rage or a foreboding sense of doom, powerlessness, or “too lateness” may set in, threatening to overpower any sense that we can make a difference. In short: the more one sees, the more powerless one may feel. The knowledge necessary for moral acting also impedes it.

Therefore, we as educators must learn to teach climate change and climate justice in ways that instill moral agency. Doing so presents at least three formidable pedagogical challenges. The first is enabling students to uncover the social justice consequences of climate change and of measures to address it. As noted above, the people most vulnerable to the ravages of climate change are—in general—not those most responsible for it and are overwhelmingly people of color and economically impoverished people. Yet climate-privileged societies and sectors may respond to climate change with policies and practices that protect them provisionally while relegating others to death or devastation. In fact, some measures to reduce carbon emissions designed by privileged sectors may further endanger climate vulnerable sectors.

A second pedagogical challenge is enabling students to uncover and address the root causes of climate change and climate injustice rather than just ameliorating the problem by lowering carbon footprints, crucial as that move is. This means, for example, drawing the complex links between climate change and unconscious assumptions of white superiority. If—to illustrate—the people displaced and dying from climate change were primarily wealthy white U.S. citizens, this country would not be impeding global efforts to lower greenhouse gas emissions and would not be continuing to extract fossil fuels with rash abandon. In addition, exposing root causes entails drawing the connections between climate change and advanced global capitalism. Earth as a bio-physical system cannot continue to operate according to the defining features of deregulated corporate- and finance-driven capitalism. That is not an ideological or political opinion; it is a physical reality.

The third pedagogical challenge is enabling students to develop hope-filled moral agency even while recognizing the magnitude and complexity of the crisis. I cannot overstate the crucial nature of both; we must acknowledge the gravity of the situation while embodying the hope that we can affect change. The survival of civilization in a relatively humane form may depend upon it.

What are keys to teaching in this way? What pedagogies will generate the moral agency for a dramatic and rapid reversal, a turn to ways of living that Earth can sustain and that breed economic, racial, and environmental equity? What and how do we and our students need to learn? Answering such questions in any comprehensive manner is beyond the scope of this article. But let me offer some preliminary suggestions.

Someone once said we need to know three things:

Having pondered this wisdom in light of pedagogy, I propose that in designing transformative teaching related to climate change in disciplines of theological and religious studies, we draw upon:

These are but pointers to daring pedagogy for a viable future if this dangerous species is to forge one. We who teach and learn at the GTU are blessed with the intellectual, interreligious, and moral community to collaboratively craft such pedagogical innovation. We must do so. The stakes are high—life and death.

This turning point in history calls to the fore the gifts and capacities of the world’s religious traditions. Therefore, the GTU—as a school educating future educators, scholars, clergy, and community leaders with powerful training in the world of theological and religious studies—is a crucial player.

If religion is to take its place in the great pan-human task of forging a sustainable relationship between the human species and our planetary home, it cannot do so in the vestiges of what it has been. The challenges of climate change and climate injustice demand will what Larry Rasmussen has called religion “in a new key.”

What does religion for ecological and equitable human life on Earth look like?

If it is to meet the challenges of this time, religion will:

Our moment in time is breathtaking and pivotal. The generations alive today will determine whether life continues on this generous planet in ways recognizably human and verdant. Exercising collaborative creativity, we can discover how to teach and learn in ways that cultivate sustainable Earth–human relations marked by justice. And we are called to draw on the deep wisdom of religious traditions in the quest for more equitable and ecological ways of shaping human societies.

May religious traditions bring their gifts to the great moral-spiritual challenge of the twenty-first century—to forge ways of being human that this glorious planet can sustain and that cultivate profound equity and compassion within the human community. May our teaching, learning, and scholarship at the GTU lead the way!

Cynthia Moe-Lobeda is professor of theological and social ethics at Pacific Lutheran Theological Seminary and Church Divinity School of the Pacific, and a core doctoral faculty member at the GTU. This article is adapted from her Excellence in Teaching Senior Faculty Lecture at the GTU in March 2018.