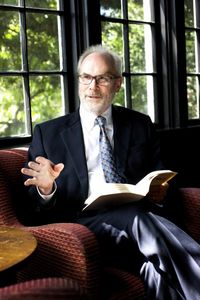 BERKELEY, CA – On May 17, the Graduate Theological Union (GTU) and Pacific School of Religion (PSR) informed their communities that Dr. Riess W. Potterveld, PSR President, will become Acting President of the GTU. PSR is one of the oldest members of the GTU, which is the largest consortium of seminaries and graduate schools in the country. Many of the schools are concentrated in an area north of UC Berkeley known as “Holy Hill.”

Potterveld’s two-year appointment, which is effective July 1, 2013, will provide the GTU with stable leadership while the Board of Trustees develops plans for filling the position on a permanent basis.

“There is a growing interest in spirituality and religion across the globe.” Potterveld said. “At a time when interreligious dialogue and understanding are essential, the Graduate Theological Union offers incredible opportunities to students and the wider public to engage in the study and appreciation of the great religious traditions of the world.”

Potterveld's election comes on the heels of the announced departure of GTU President James A. Donahue, who has been tapped to serve as the first lay president of St. Mary's College of California in Moraga.

Under Donahue's thirteen years of leadership, the GTU strengthened interreligious endeavors while maintaining its commitment to ecumenical relations among Christian traditions. Donahue spearheaded the creation of the Center for Islamic Studies and increased funding for the Richard S. Dinner Center for Jewish Studies.

Potterveld's commitment to the consortium's core mission of “building bridges across Christian denominations and other faith traditions” has already produced fruit. He oversaw the sale of a PSR-owned building to Zaytuna College, the first Islamic undergraduate institution in the United States. Zaytuna plans to relocate to “Holy Hill” by 2014 and anticipates participating in the interreligious community.

“This development will give PSR students and the whole GTU community further opportunities to learn more about the fastest growing religion in our world,” he said.

During Potterveld's three-year presidency, the 147-year old multidenominational seminary underwent both belt-tightening, and new program development. In Fall 2014, the school will roll out new courses that will prepare students seeking deeper ways to connect their activism and non-profit work, as well as those called to more traditional paths of ministry.

“He has led PSR’s adaptation to the difficult new realities of theological education with wisdom and sensitivity,” PSR Board Chair Julien Phillips said. “I can think of no one better equipped than Riess to lead the GTU into its next era.”

Currently Potterveld is co-convener of a task force, commissioned by the GTU Council of Presidents, which is evaluating the potential for member schools and other organizations to physically consolidate and share facilities; the goal is to reduce costs and increase synergies.

GTU Board of Trustees Chair Hal Leach commented, “Riess' experience provides critical insight into the dynamics of the GTU. We look forward to exploring new opportunities for continued cooperation and putting the GTU on solid footing for years to come.”

Potterveld also brings with him over 20 years of education and fundraising experience, as well as knowledge of what many of the schools in the consortium may have in their futures.

“There are enormous challenges faced by many theological schools today – among them declining enrollments and insufficient capital. I really look forward to introducing new people and supporters to the Graduate Theological Union,” said Potterveld.

“With almost 1,100 students and more than 600 courses per year offered in degree and certificate programs, the schools of the GTU are a unique composition of scholars and students exploring the interface of religion with culture, art, science, sacred texts, and beyond. We will be looking for new ways people outside the GTU can share in these engaging resources.”

Pacific School of Religion's Board of Trustees has already appointed a Presidential Search Committee, and will begin working immediately to identify interim leadership.

Potterveld earned his M.Div. from Yale Divinity School, his M.A. and Ph.D. from Claremont Graduate School, and is an ordained United Church of Christ minister. Before becoming President of Pacific School of Religion, he was President of Lancaster Theological Seminary in Pennsylvania for eight years. He also served as PSR's Vice President for Institutional Advancement from 1993-2002, and its Acting Dean from 2000-2002.

He and his wife Tara, an accomplished artist and nationally-known sign language interpreter, share four sons and six grandchildren.

Committed to creating conversations across faith traditions and disciplines, the GTU produces pioneering leaders in teaching, research, and service who are prepared to engage the increasing complexities of a global society.

A multidenominational Christian seminary in Berkeley, CA, Pacific School of Religion has been preparing bold leaders for historic and emerging faith communities since 1866. Its graduates are known for innovative ministries of compassion and justice around the world. It has been a member of the Graduate Theological Union since 1964.