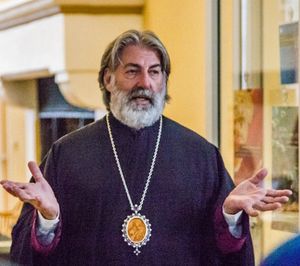 June 17, 2019  -  Metropolitan Nikitas Lulias of the Dardanelles has been unanimously elected as the new Archbishop of Thyateira and Great Britain, an archdiocese of the Eastern Orthodox Church. Since March of 2007, the newly elected archbishop has served as director of the Patriarch Athenagoras Orthodox Institute (PAOI) in Berkeley, an affiliate of the Graduate Theological Union devoted to the study of the Eastern Orthodox Christian tradition.

Archbishop Nikitas will oversee a diocese of more than 100 churches and monasteries in England, Scotland, Wales, the Republic of Ireland, the Isle of Man, and the Channel Islands. In a statement to The National Herald upon learning of his election, the archbishop-elect expressed gratitude at the opportunity to serve in this new role. “I pray to God to grant me illumination to do His Will. I also pray that all those things that I have learned in the Mission and also at the Patriarch Athenagoras Orthodox Institute will help me to serve God and His Church as a good and humble shepherd of the People. I thank all the good people for their good wishes and love that they have shown to me all these years.”

Rabbi Daniel Lehmann, president of the Graduate Theological Union, expressed his appreciation for Archbishop Nikitas and his twelve years of leadership in Berkeley. “Under the direction of Metropolitan Nikitas, the Patriarch Athenagoras Orthodox Institute has faithfully advanced scholarship surrounding the theology, history, and traditions of Eastern Orthodox Christianity within the interreligious setting of the Graduate Theological Union. We are grateful not only for his leadership in deepening the study of Orthodox Christianity at PAOI and the GTU, but also for his committed advocacy work to raise awareness about and bring an end to human trafficking. The prayers and support of the entire GTU community will go with Archbishop Nikitas as he moves on and continues to fulfill his sacred calling in this new role.”

The enthronement of Archbishop Nikitas is scheduled to take place on Saturday, July 27, at St. Sophia Cathedral in London. The Patriarch Athenagoras Orthodox Institute will initiate the search for its next director this summer.