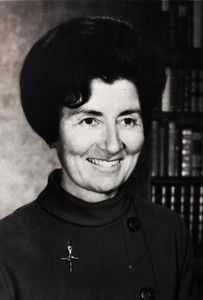 We have received word of the death of Dr. Dody Donnelly, who taught at several schools in the GTU. She died in San Rafael on April 6, and there will be a memorial Mass for her on Friday, May 10 at 10.30 AM at the McLean Chapel on the campus of Holy Names University, 3500 Mountain Blvd. Oakland. In lieu of flowers, donations may be made to Amnesty International www.amnestyusa.org.

Donnelly grew up in San Francisco where she attended Corpus Christi (grade) School and Ecole Notre Dame des Victoires (secondary school). After graduation in 1938, she joined the Sisters of Saint Joseph of Orange as Sister Gertrude Joseph Donnelly. She received an AB in English Literature, Dominican College of San Raphael (1950); MA and Ph.D. in the classics, Catholic University of America (1962); Fullbright Scholarship, American Academy, Rome, Italy (1962); and Th.D., Pacific School of Religion (1973).

In 1968, she received considerable press as the first Catholic nun to live on campus at a Protestant seminary. In 1971, while working towards her Th.D. at Pacific School of Religion, she became a full time professor at Jesuit School of Theology in Berkeley. She later taught at San Francisco Theological Seminary, Starr King School for the Ministry, Pacific School of Religion, Holy Names University, and the Fromm Institute. She served as director of a Lilly Foundation grant for Religious Formation at PSR. During the 1980s, she left the Sisters of Saint Joseph of Orange but continued as an associate with the order.

Donnelly served as consultant to pastoral and educational organizations concerned with program design and team building. She led retreats and workshops, as she wrote, "with a focus on ecological theology and a cosmic, earth centered spirituality." She was active in Amnesty International, Center for Responsible Tourism and training those who help train and teach prisoners. She was a founding member of Broken Bud, an organization fighting child prostitution in World Tourism. She became particularly interested in Western mysticism during the later part of her career.

Her books include Radical Love-An Approach to Sexual Spirituality (1986), Team: Theory and Practice of Team Ministry (1977), Sister Apostle (1964), St. Thomas More's Responsio ad Lutherum -Introduction and translation from the Latin (1962), and How (1960). Her papers in the archives of the GTU Library are listed online at http://www.oac.cdlib.org/findaid/ark:/13030/kt5w1035rd/entire_text.

All of us at the GTU are grateful for Dr. Donnelly’s teaching and scholarship that contributed so much to this consortium for many years. Expressions of sympathy to her family and friends can be made via an online Guest Book at http://www.legacy.com/obituaries/marinij/obituary.aspx?n=dorothy-donnelly-dody&pid=164381995.