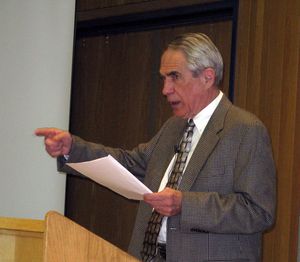 From March 8-10, 2018, the Center for Theology and the Natural Sciences (CTNS) at the GTU hosted noted theologian Ron Cole-Turner as this year’s CTNS Russell Family Fellow in Religion and Science. Ron is the H. Parker Sharp Professor of Theology and Ethics at Pittsburgh Theological Seminary, where he teaches courses on Christian theology and transhumanism, medical ethics, and Christian theology and evolution. He is a founding member of the International Society of Science and Religion, he serves on the editorial board of advisors for CTNS’s refereed journal Theology and Science, and he is a long-term friend of the Center since its early days in the 1980s.

The theme of this year’s Fellowship events was “New Theological Perspectives on the Science of Human Origins.” We began on Thursday evening, March 8, with the CTNS Fellow’s Public Forum, where Ron adressed, “The Human Surprise: The Unexpected Science of Our Origins and Why It Matters for Theology.” Ron explored ways in which scientific discoveries have suggested a new and surprising view of the origins of today's human family.  According to Ron, the classic "Out of Africa" story, prominent among scientists from the mid-1990s until recently, held that "modern" Homo sapiens emerged as a distinct species about 200,000 years ago and spread around the world, replacing all previous forms of humans. This view has been called into question by several recent developments suggesting that modern humans came into existence not in a flash but in many small modifications stretching back further than we once thought. The human story is a tale of multiple hominin lineages overlapping in time, with periods of separation followed by interbreeding. Building on his groundbreaking 2016 book, The End of Adam and Eve: Theology and the Science of Human Origins, Ron explored the impact of these discoveries on Christian theology, centering on our need for redemption and our understanding of Jesus Christ as incarnate in this complex hominin lineage.

Ron returned to, and expanded on, these questions during Saturday's Research Conference on Saturday entitled “New Perspectives on Human Origins: Three Challenges for Christian Theology.” At the conference, Ron noted that recent discoveries in human origins directly challenge three classic Christian theological ideas: (1) Human uniqueness and the "image of God"; (2) human "fallenness" and the meaning of redemption; and (3) human diversity and unity. Addressing these issues is a must for any Christian theology that seeks to understand the core themes of the faith, centered in Christology, in light of the best available scientific insight into human nature.

Ron’s presentations were exhilarating. They brought us to the frontier of human evolutionary history and its theological impact on the claim of imago dei (image of God), the historical challenge to Adam and Eve, the evolutionary basis for the apparent universality of human sin, and the global efficacy of the redemption of Christ. I believe all who attended these events were enthralled. GTU professor Ted Peters may have said it best: “Ron Cole-Turner's scholarship and teaching provide a splendid example of systematic theology engaging the wider culture, especially science and technology. Like an Olympic swimmer, Cole-Turner dives deeply into each secular domain, to swim and to understand science before drawing out theological and ethical implications. For three decades we have benefited from his pioneering work in genetics, stem cells, bioethics, evolution, anthropology, and transhumanism. Cole-Turner offers the best of 'Theology and Science' in action.”