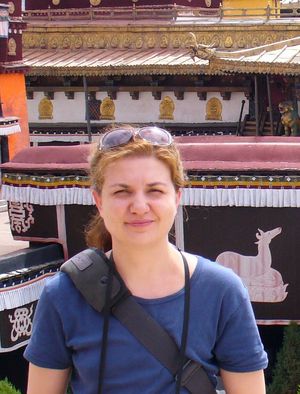 Dr. Dessi Vendova earned her PhD, MPhil and MA degrees in Religion (Buddhism) from Columbia University and specializes in early Indian and premodern Chinese Buddhism and art. Before her doctoral studies at Columbia University, Dr. Vendova spent eleven years studying and living in China and Japan. Enrolled in the Department of Chinese Language and Literature of Peking University, in July 2006 she received a BA in Chinese Language and Literature, and in July 2009, an MA degree in Classical Chinese Literature specializing in the pre-Tang and Tang dynasty literature, religion and culture. After her graduation from Peking University, and funded by a Japanese Government Research Student Scholarship, she went on to live in Kyoto, Japan as a research student at Kyoto University.

Dr. Vendova’s current research project is an interdisciplinary study linking Buddhist studies, Buddhist narrative texts, art history, and archaeology and re-examines the life of the Buddha in Indian, Central Asian and Chinese Buddhist narratives and art. Her dissertation, “The Great Life Story of the Body of the Buddha: Re-examination and Re-assessment of the Images and Narratives of the Life of Buddha Shakyamuni,” bridges disciplinary boundaries by bringing together evidence from the fields of Buddhist studies, literature, art and archaeology.

Dr. Vendova’s research relies on diverse sources: early Buddhist canonical sources, the earliest textual versions of the extended story of the Buddha’s life, art historical and archaeological material remains from early stupa sites and cave temples in India, Central Asia and China. As much of Dr. Vendova’s research is objects-based, relying on physical art historical and archaeological evidence, fieldwork at excavated sites and museum collections in India, China, in the US and abroad was as important as the research of texts. Her 2018-2019 residency as a fellow at the Department of Asian Art of the Metropolitan Museum of Art provided further opportunity to closely study and research objects from the Met’s collections related to her research.

In terms of future research, and inspired by her current project, Dr. Vendova will also be moving on to a second book-length project, “Trees in the Life of the Buddha.” This research, similar to her current one, will continue to bridge disciplinary and regional boundaries and explore both textual and visual material related to religious practice connected with tree worship, the presence of trees, tree shrines, tree spirits, and other tree deities in both early Buddhist texts and art.

Journal Article: “Embodied Virtue: Chinese Versions of the Story of Rupavati, the Buddha’s Previous Birth as a Woman,” The Journal of Chinese Buddhist Studies (JCBS) (tentative), (in preparation).