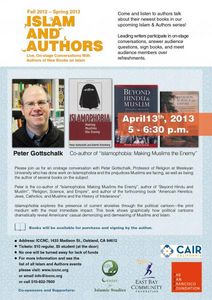 Co-sponsored by the Center for Islamic Studies.

Tickets: FREE admission to all CIS, and GTU students. $10 general/$5 students at the door, or available at www.iccnc.org.

Peter Gottschalk is Professor of Religion at Wesleyan University. He received his B.A. in History at the College of the Holy Cross, his M.A. in South Asian Studies at the University of Wisconsin-Madison, and his Ph.D. in the History of Religions from the University of Chicago. Peter’s research and teaching concentrate on the dynamics of cultural interpretation and conflict in the context of Islam, Hinduism, and the West. He is interested particularly in understanding how assumptions of mutual antagonism form between groups despite evidence of religious confluence. Peter enjoys presenting on these topics and has discussed them in the U.S., India, Bangladesh, and Europe at colleges and universities, professional conferences, public events, and religious communities. He has appeared on CNN, Air America, Voice of America, and National Public Radio, while his work has been mentioned in USA Today, The New York Times, and the On Faith website of The Washington Post.

The term "Islamophobia" reflects the largely unexamined and deeply ingrained anxiety many Americans experience when considering Islam and Muslim cultures. Historically, Americans have seldom given voice to these anxieties since they have had, until the last half-century, few connections to Muslim cultures and a small domestic Muslim minority. However, in times of crisis, such as the Iranian hostage situation or, most recently, the September 11th attacks, the long-simmering resentments, suspicions, and fears inherited along with a Christian European heritage manifest themselves most directly in conditions that appear to affirm Americans' darkest concerns. Like a vicious cyclone feeding off of its own energy, Islamophobia takes uncommon events as evidence fitting its worst expectations and turns these into proof that perpetuates those ill-informed expectations.

Islamophobia explores the presence of these anxieties through the political cartoon—the print medium with the most immediate impact. This book shows graphically how political cartoons dramatically reveal Americans' casual demonizing and demeaning of Muslims and Islam. And the villainizing is shown to be as common among liberals as conservatives. Islamophobia also discusses the misunderstanding of the Muslim world more generally, such as the assumption that Islam is primarily a Middle Eastern religion, where as the majority of Muslims live in South and Southeast Asia, and the misperception that a significant portion of Muslims are militant fundamentalists, where as only a small proportion are.