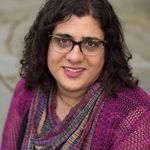 In the final three decades of the twentieth century, Liberal American Judaism struggled to address two new challenges to longstanding conceptions of the Jewish family: interfaith marriage and same-gender relationships. The trajectories of these two issues raises the question: if non-Orthodox Jewish communities are more formally accepting of same-sex relationships than they are of interfaith families, why are Jewish communities more welcoming of interfaith couples and families than they are queer friendly?

Samira K. Mehta is an Assistant Professor of Women and Gender Studies and of Jewish Studies at the University of Colorado Boulder. Her research and teaching focus on the intersections religion, culture, and gender, including the politics of family life and reproduction in the United States. Her first book, Beyond Chrismukkah: The Christian-Jewish Blended Family in America (University of North Carolina Press, 2018) was a National Jewish book award finalist. Mehta’s current academic book project, God Bless the Pill: Sexuality and Contraception in Tri-Faith America examines the role of Jewish, Catholic, and Protestant voices in competing moral logics of contraception, population control, and eugenics from the mid-twentieth century to the present.

Mehta’s colleague Brett Krutzsch will be joining her for Q&A. Krutsch teaches at NYU and staffs its  Center for Religion and Media. Krutzsch is an expert on LGBTQ religious history.