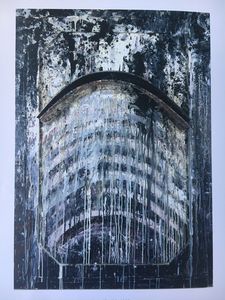 Beyond Words: Art Inspired by Sacred Texts features contemporary works by Mohamad Hafez, Meg Hitchcock and David Maxim, artists whose work takes its inspiration from the holy texts of the world's religions.

Mohamad Hafez, inspired by the Qur'an, creates intricately detailed 3D works, reflecting the political turmoil in the Middle East through the compilation of found objects, paint and scrap metal. He creates surrealistic Middle Eastern streetscapes emblazoned with Qur’anic calligraphy as spray painted acts of revolutionary protest. Meg Hitchcock takes her inspiration from a wide range of source material, cutting out letters and combining them to create intricate designs. By recombining the holy texts of diverse religions, her work animates the commonalities woven through all scripture. David Maxim, a San Francisco-based artist, creates monumental "constructed pictures" that illustrate stories and passages from the Old and New Testaments. Seeing the Bible as a tremendous source of theatre, his works incorporate sculptural elements, made from crossbeams, pulleys, ropes and hinges, alluding to the hidden workings of stagecraft. Finally, Eleanor Creekmore Dickinson, a Beat-era, Bay Area-based artist, committed to figure drawing, gives us life-sized reproductions of Adam and Eve in the Garden of Eden. Reimagining the pairs' care-free days, pre-expulsion, Dickinson gives a refreshing portrayal of a story that so often focuses on the Fall.

Together, these works show that sacred texts are still alive. Taking the viewer beyond the words read on a page, the artwork in this exhibition brings to life ancient stories and shows the inspirational lifeforce still at work in these great writings.

Celebrate the opening of Beyond Words with live music and refreshments! The show will be on view from September 5 - December 13, 2019.