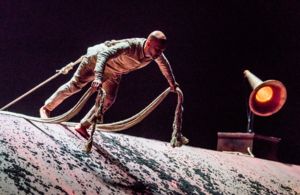 As part of the weekend-long resiency around Akram Khan's XENOS, join the rest of the performance go-ers in celebrating a weekend of dance and artistsic literacy. Gather together in CARe's Doug Adams Gallery for a breakfast celebration, allowing you to discuss and share what you learned over the weekend. Discussion will be facilitated by Sabrina Klein, Director of Artistic Literacy, Cal Performances.

British (by Bangladeshi descent) dancer/choreographer Akram Khan is revered for physically demanding, visually spellbinding solo productions which combine Indian kathak with modern dance in works of sublime storytelling. Seen here in an exclusive West Coast engagement, XENOS is Khan's final solo creation before his planned retirement from solo performance. A powerful work that reveals the beauty and horrors of the human condition through the myth of Prometheus, it is told from the perspective of an Indian soldier recruited to fight in the trenches of World War I for the British Crown. "Xenos" means "stranger" or "alien" in Greek, and Khan's work bravely explores the soldier's alienation as he is trapped between two cultures in the colonial system. Performed with live musical accompaniment. "A work of incredible potency, of emotional and cultural depth that sings and surges with the confidence of an artist at the peak of his powers" (The Stage, London). More info: https://calperformances.org/performances/2018-19/dance/akram-khan-xenos.php